Red thread/red bar is a participative urban installation resulting from a four month art residency in Haubourdin, a commune close to Lille, France. The residency, organised by the local authorities, aimed to build a link between residents and the Ferme du Bocquiau, a future cultural centre. This link has been literally translated into a red line installed throughout the city.

‘Red Thread-Red Bar’ takes as inspiration the red and white lines of walls of the Ferme du Bocquiau. The walls of this building were built in the fourteenth century using a method, unique to the area, which alternated layers of red bricks and white chalk stripes. This method, called Rouge-Barre (or ‘Red-Bar’), gave its name to this project. 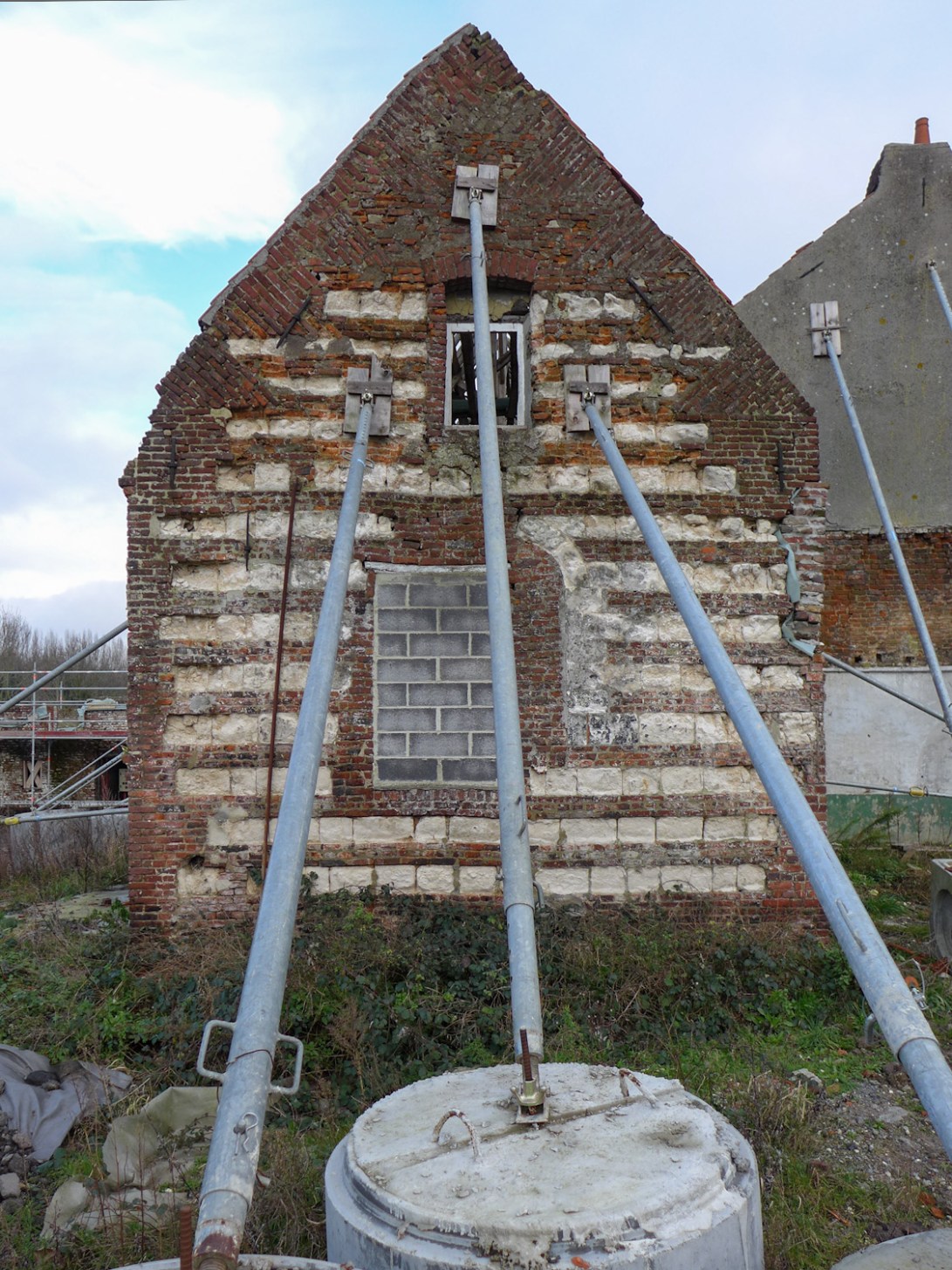 The installation forms a visual link between the Ferme du Bocquiau, and the different areas of the city, which are disconnected from each other like independent islands. It also symbolises the human link formed by the inhabitants’ sense of conviviality and sharing, as well as the link that has been formed through their coming together as part of this project to make the red thread.

About 600 residents were involved in the creation of the red thread. Different crafting techniques were used, such as weaving, knitting, knotting, crocheting and sewing. All the techniques used a synthetic netting, commonly employed for storing agricultural produce. Weaving was mainly used, as a reference to the local industrial history. It was carried out on the ‘Red-Bar’, a mobile weaving loom built with the help of a local joiner. 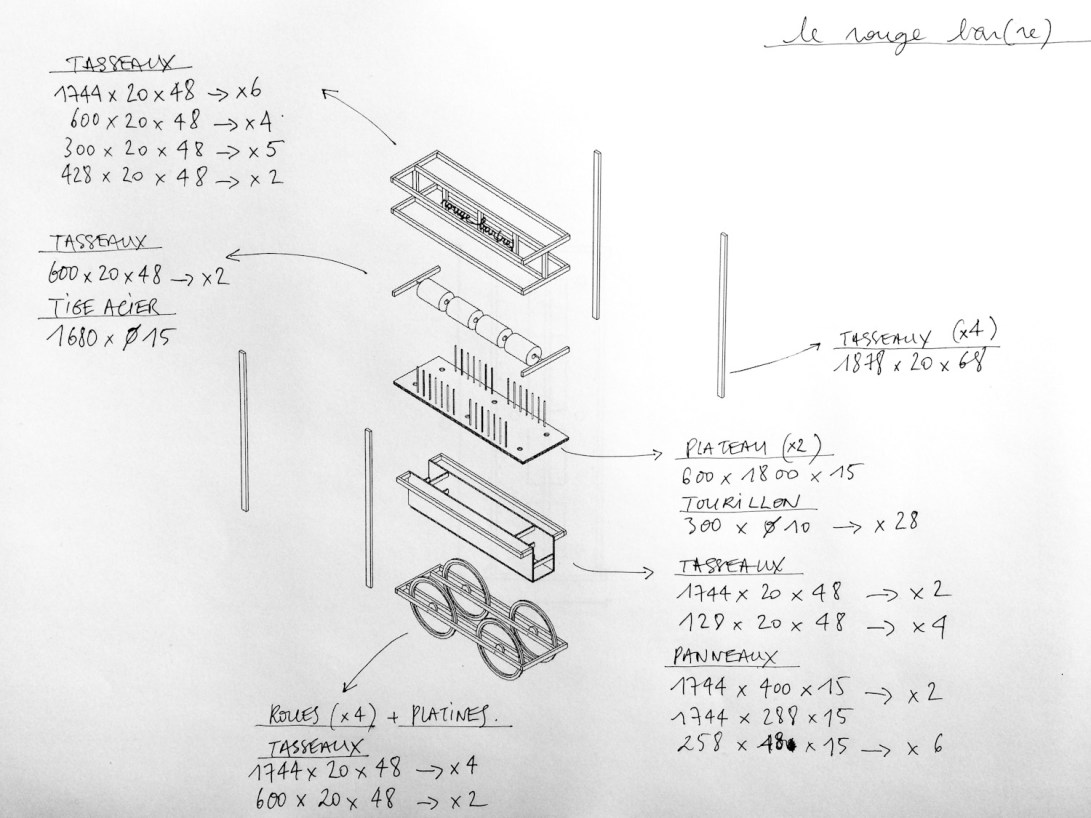 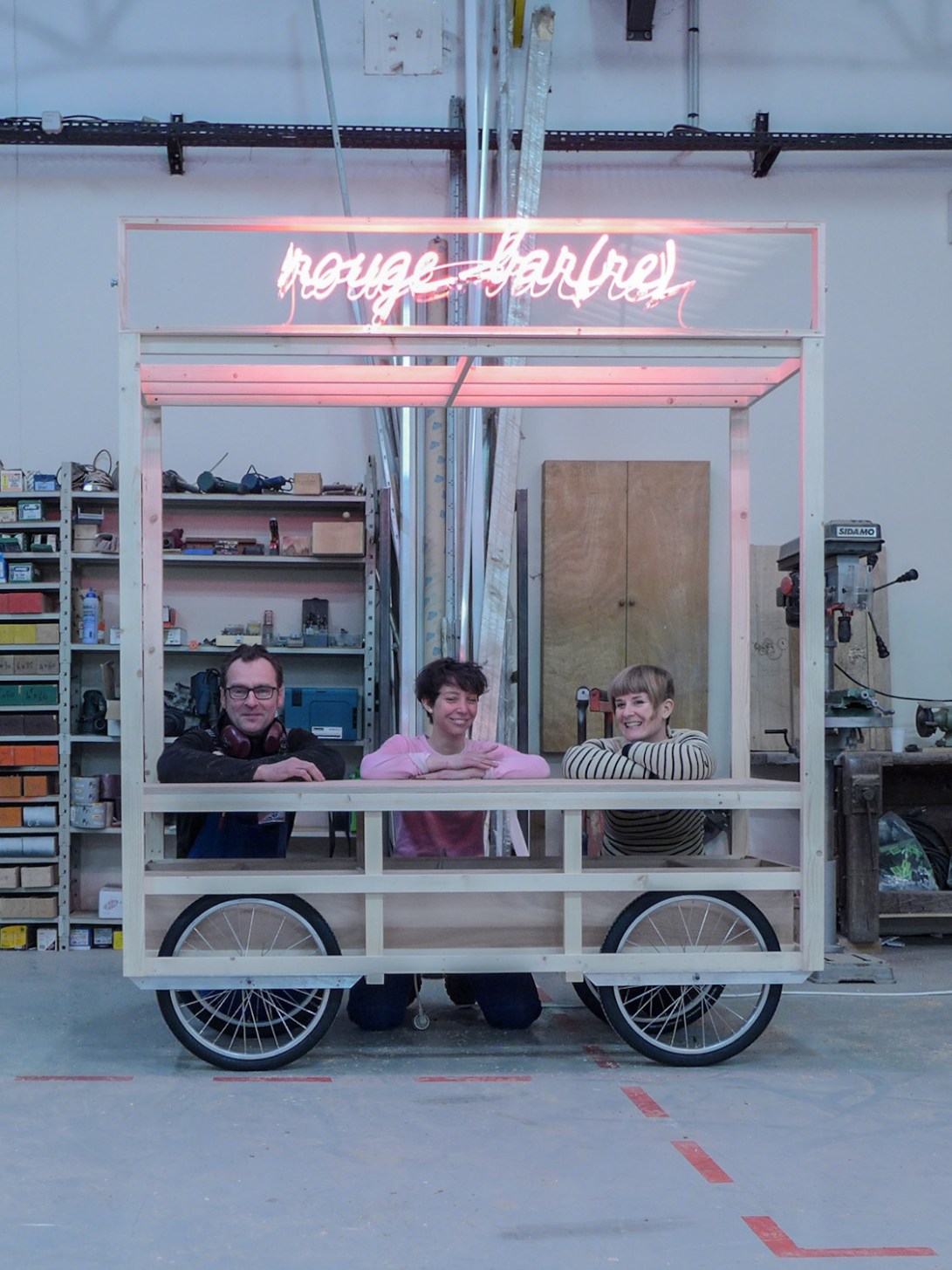 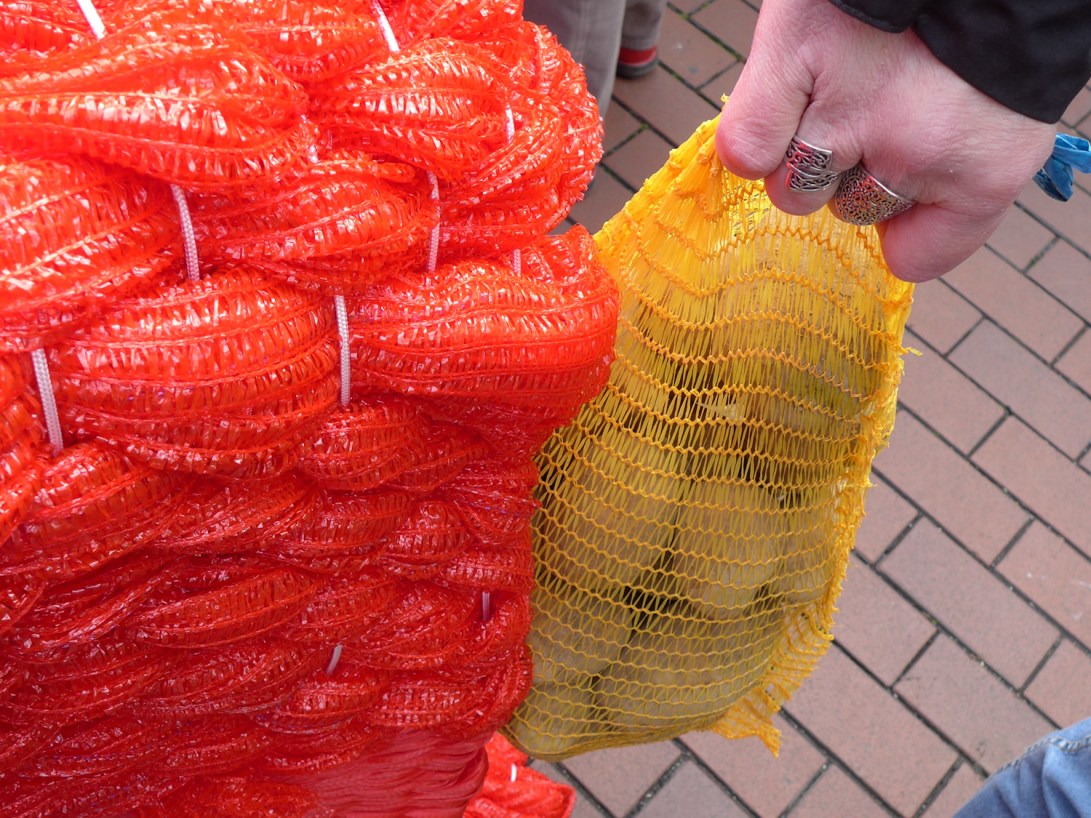 We were able to make 95.7 metres of red thread with the Red Bar, our mobile weaving loom, thanks to more than 500 honorary weavers whom we met as we were taking the machine on a 23.3 km expedition through the city. 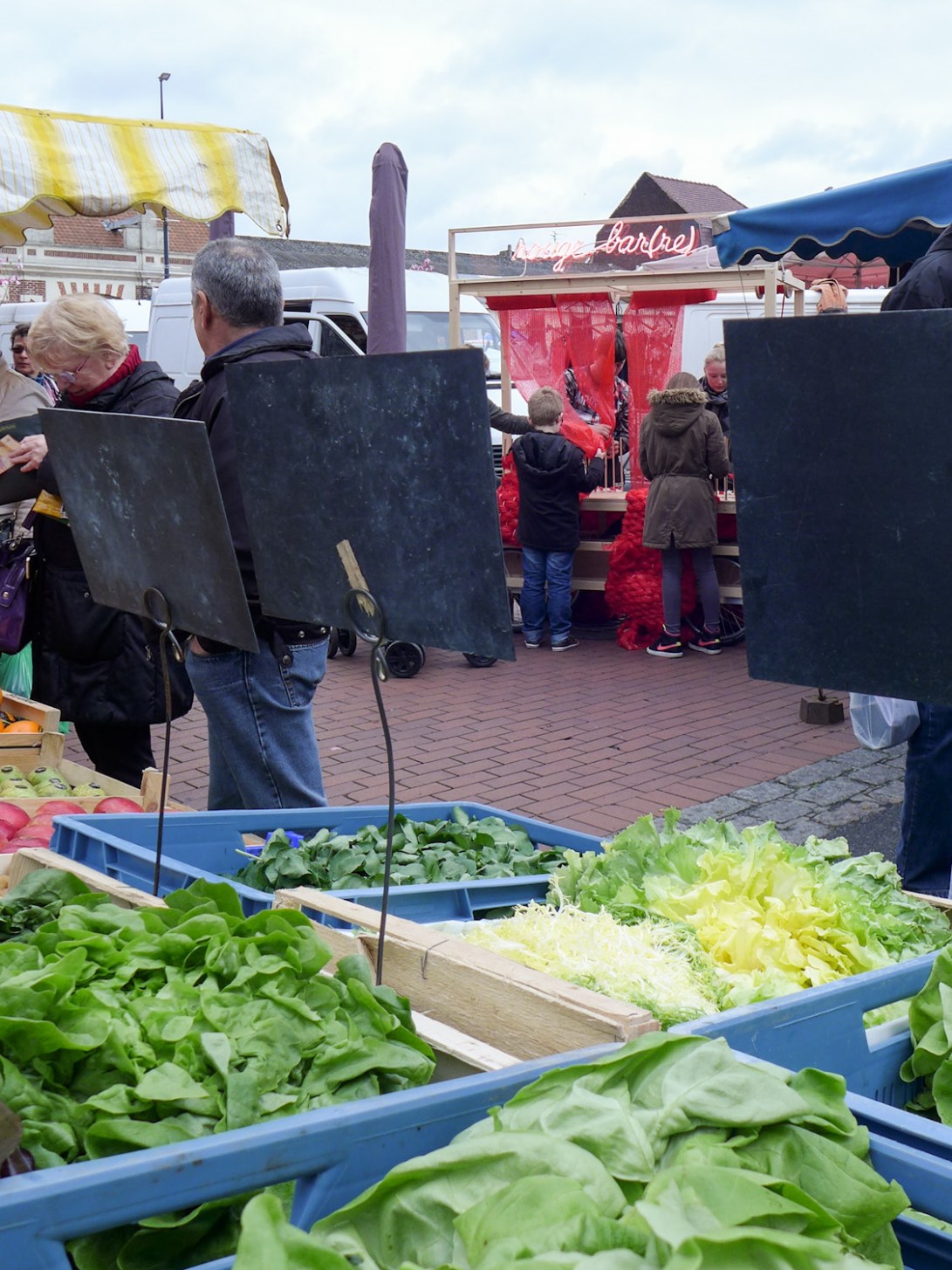 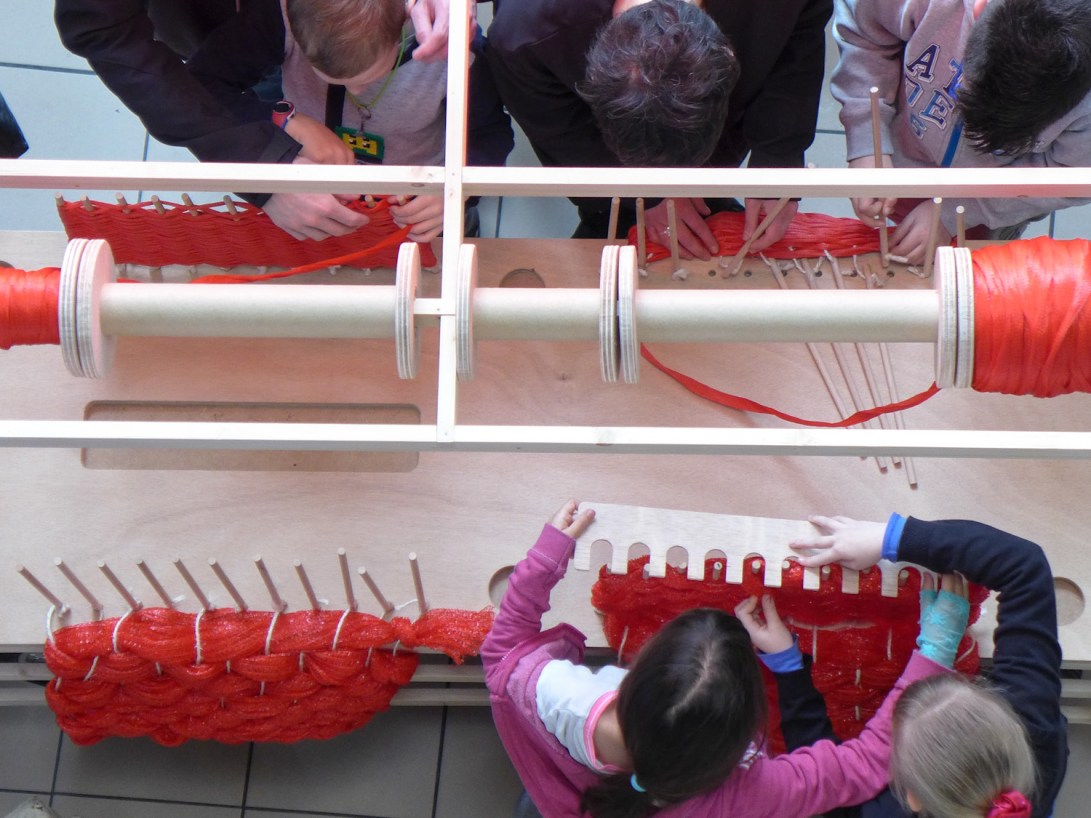 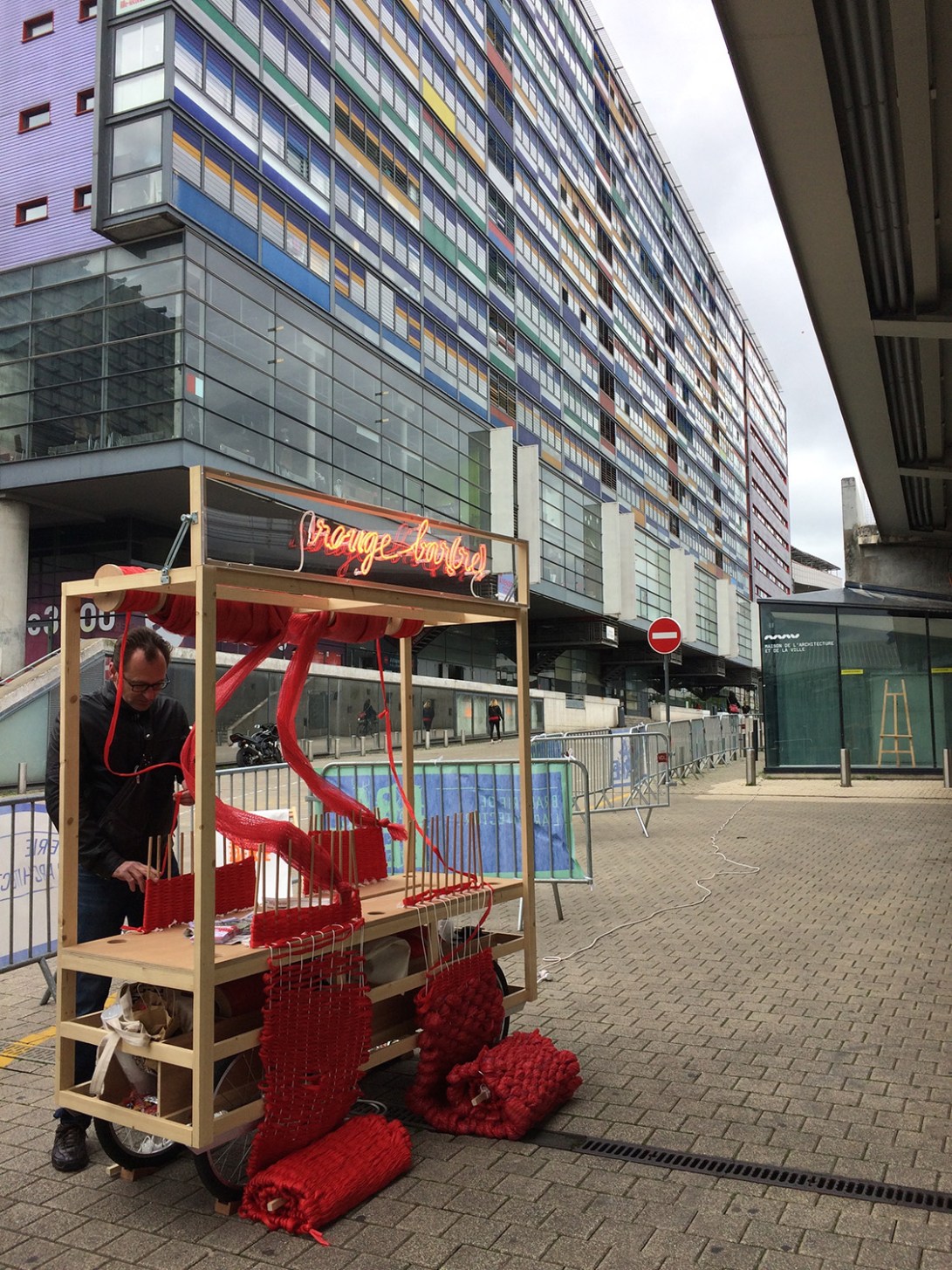 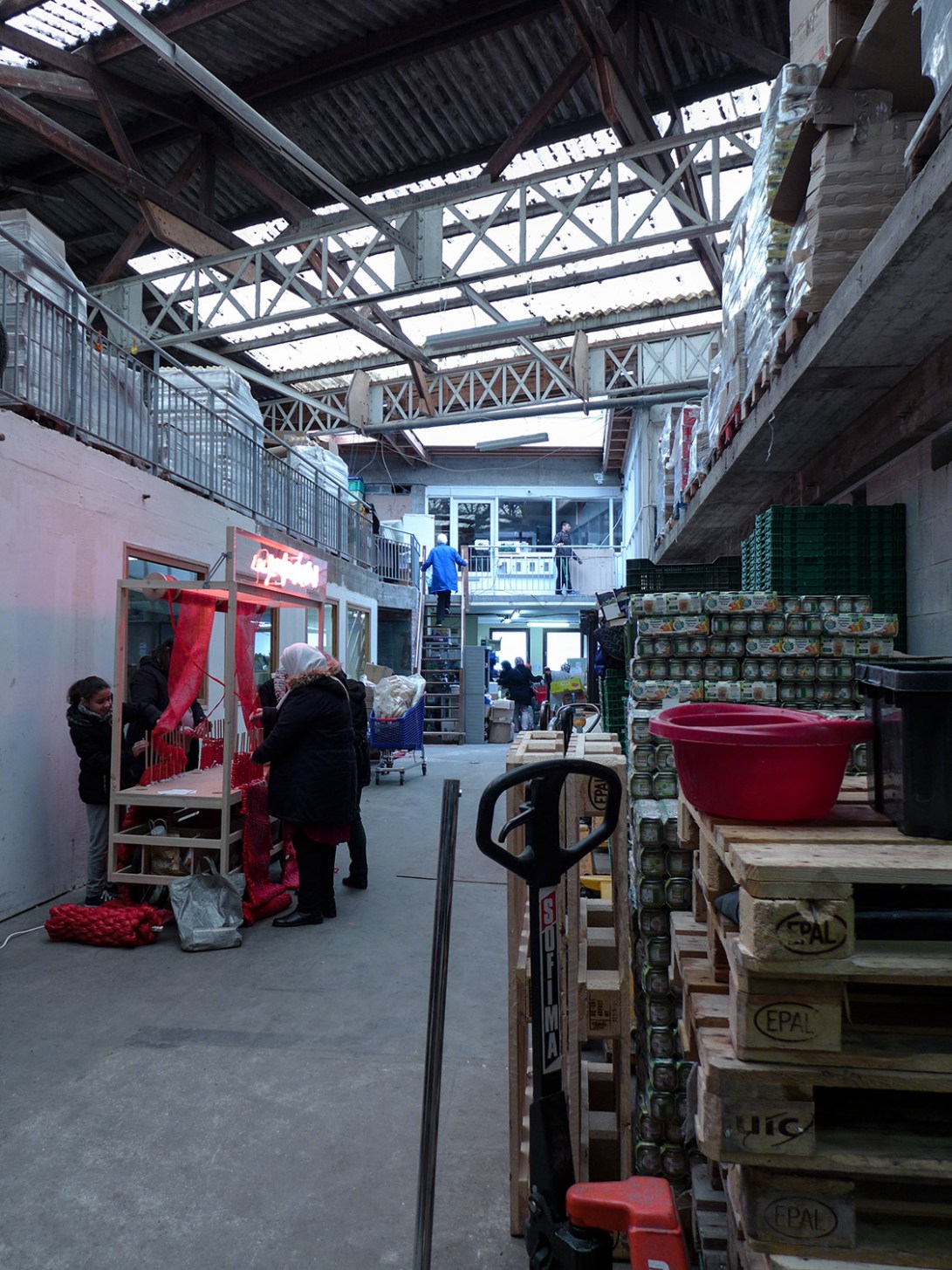 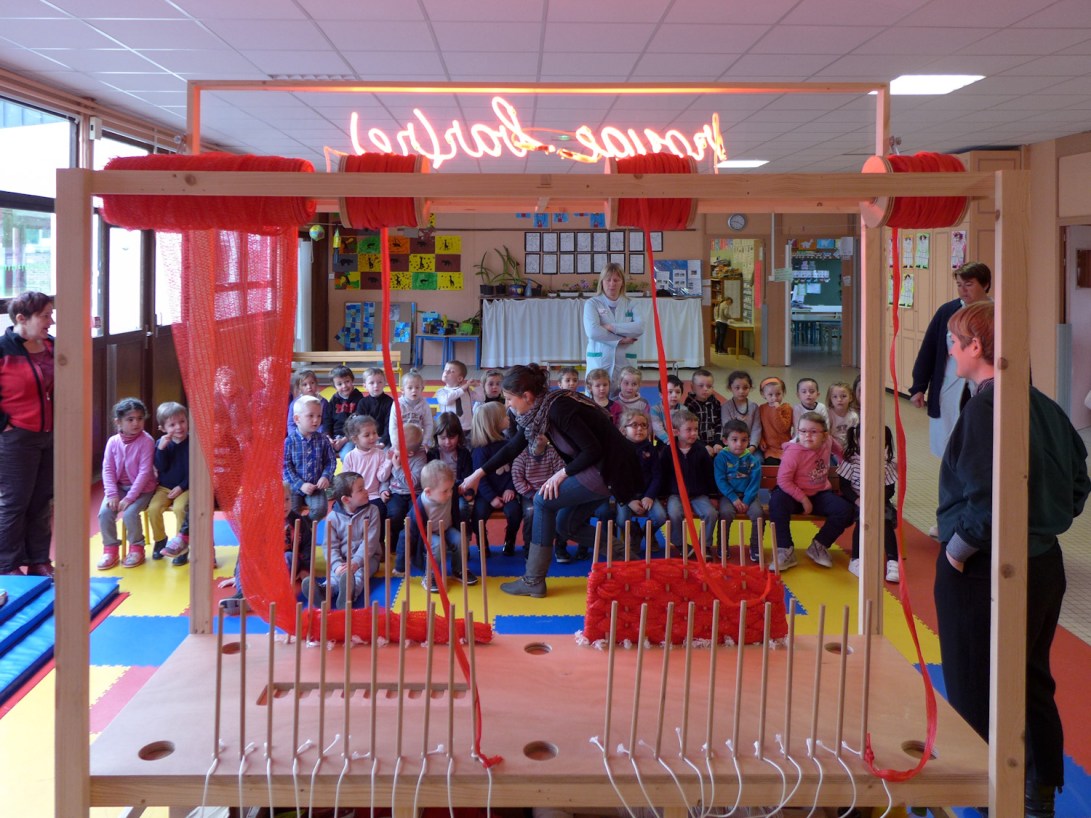 The first red thread section was made by a local association, following a patchwork pattern. It indicates the path beyond the level crossing which cuts the city into two halfs, and marks the first of a series of ancient weaving workshop-houses. 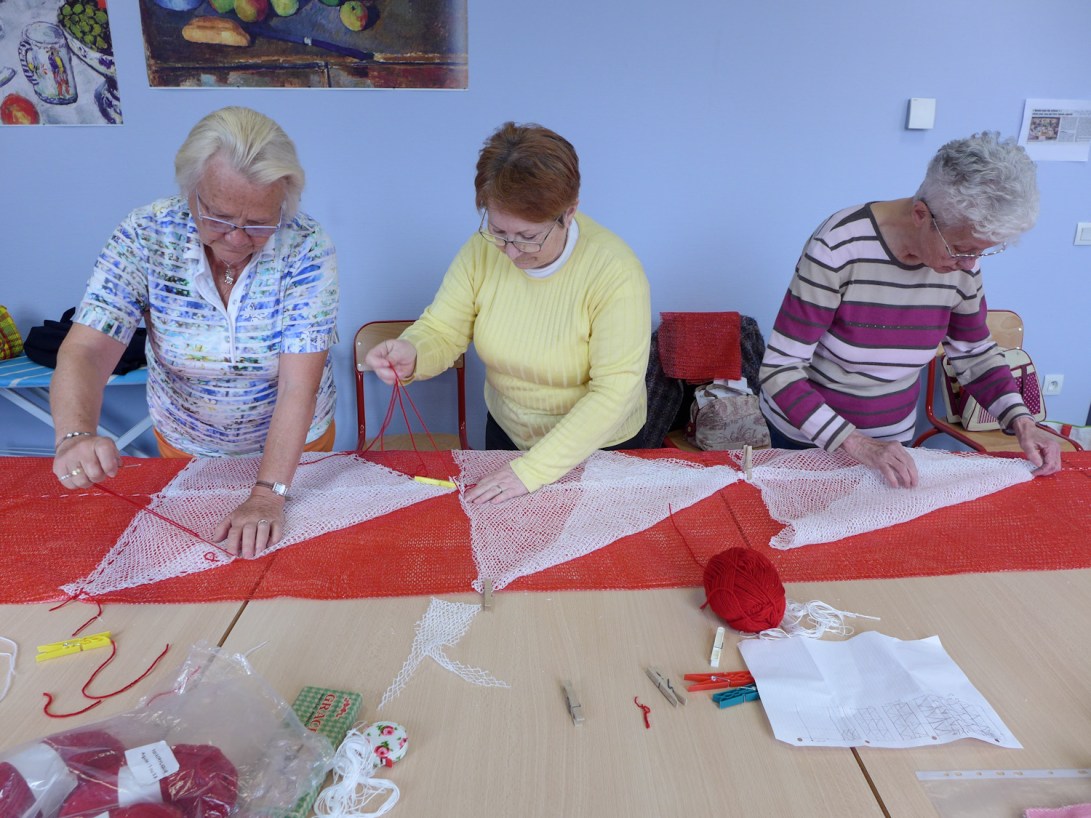 65 meters of Red-Thread made with the Red-Bar visually cross the Deûle River, one of the main barrier which divide the city from North to South. 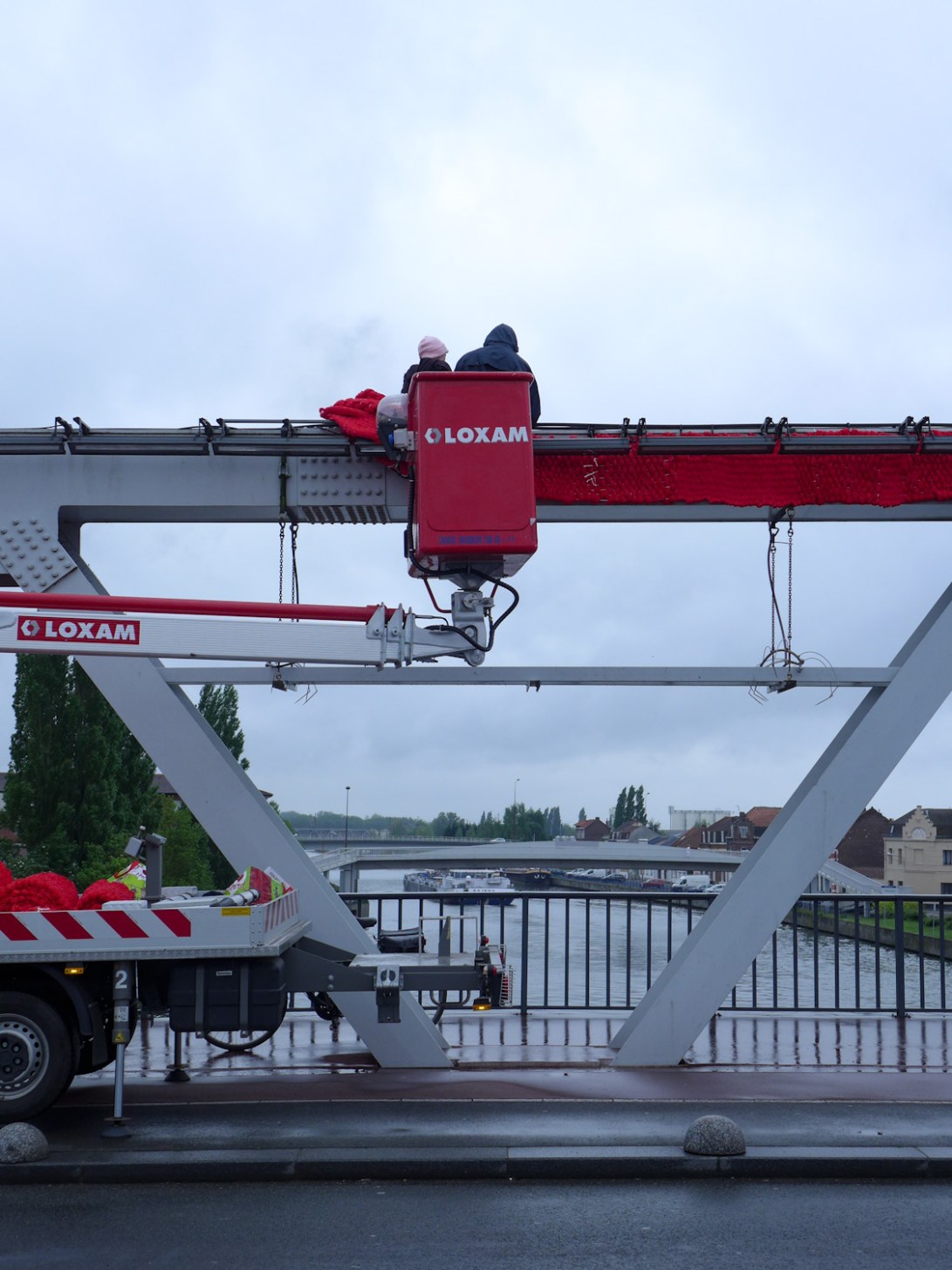 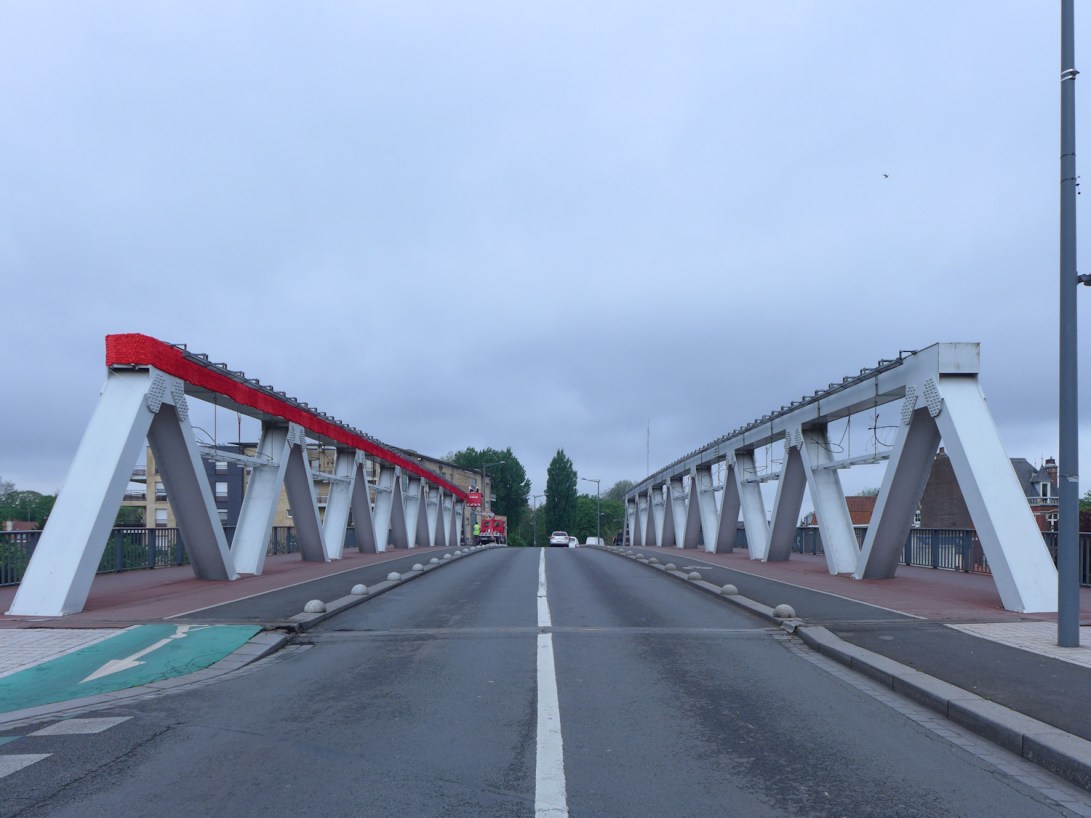 More than 175 meters of red thread follow and mark the Mail du bon pêcheur, a hidden and intimate path. 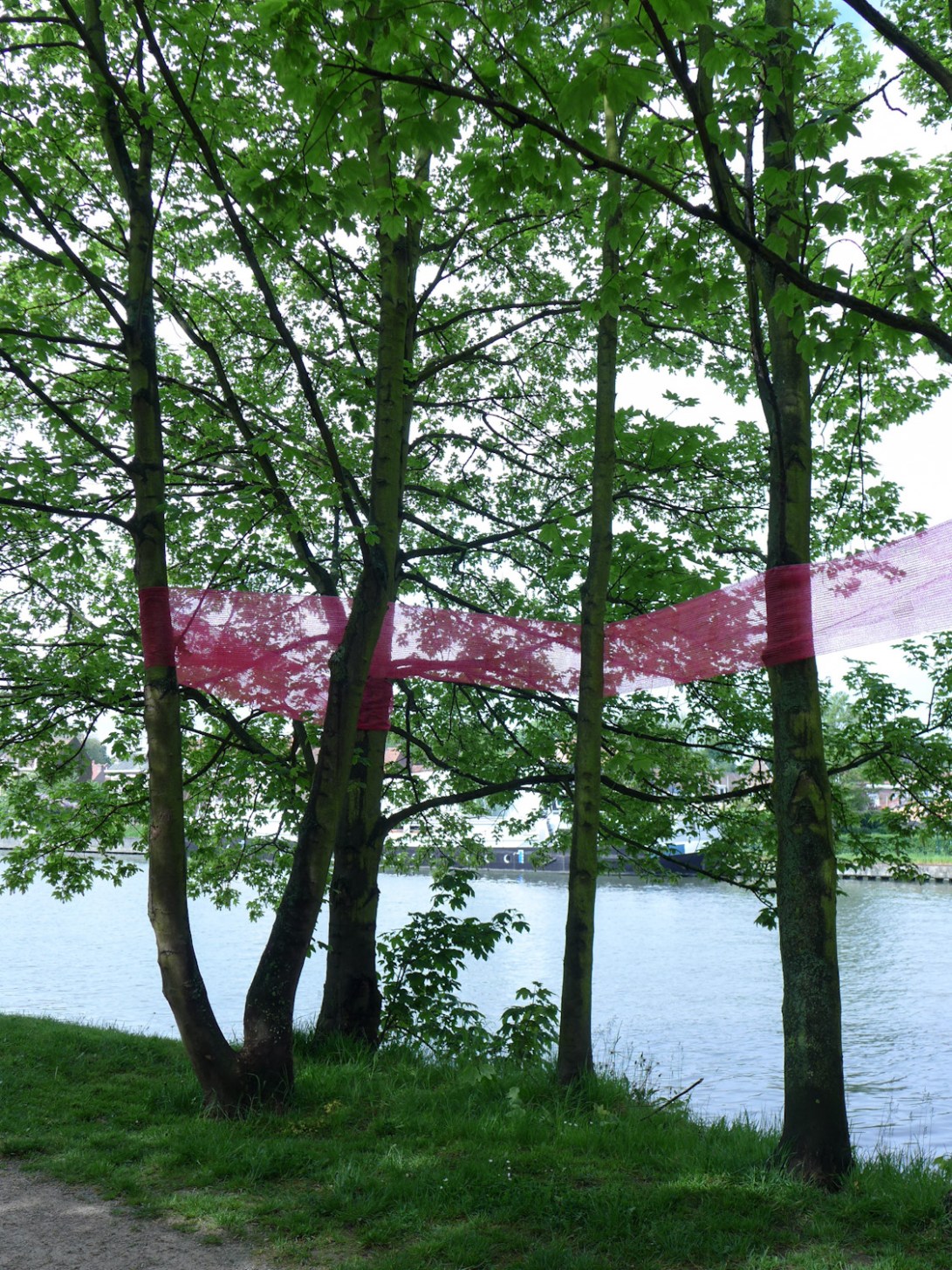 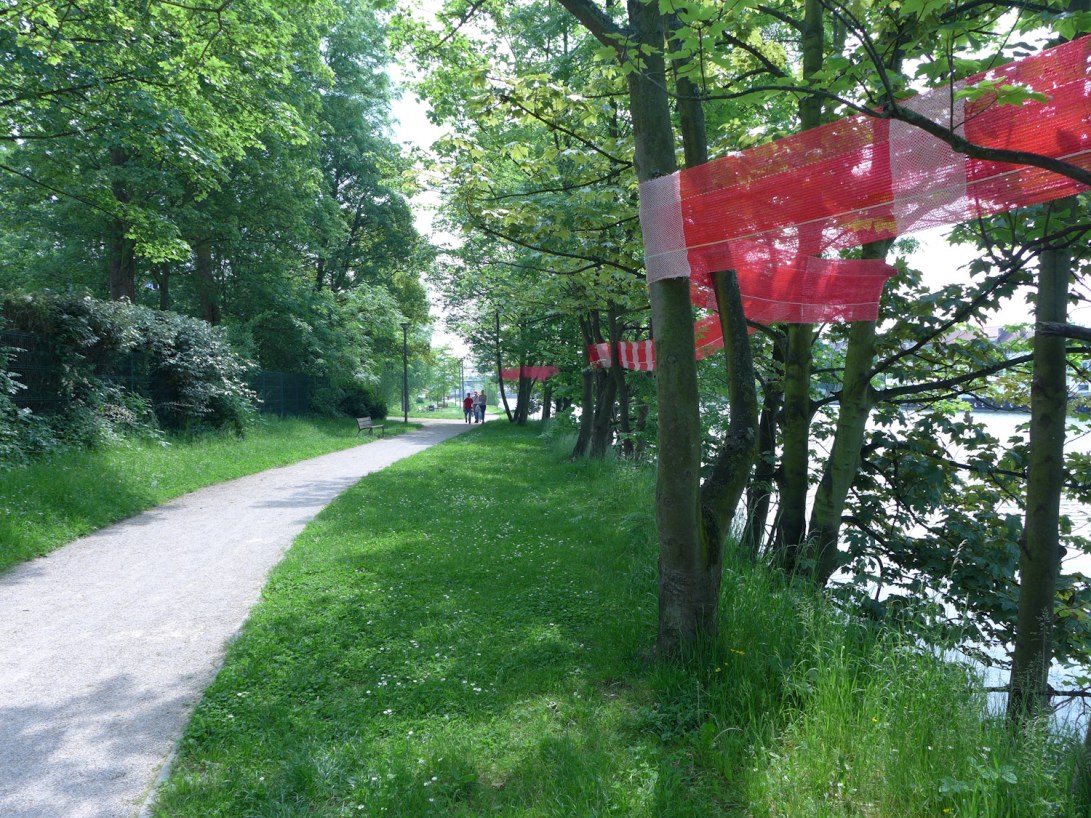 During 5 workshops with the youth club, we worked more deeply on playful versions of the red thread, fashioning it into objects in which it was possible to stay, rest or play for a while… Among the many ideas proposed by the teenagers, we created together a large hammock, a cocoon, and a net. 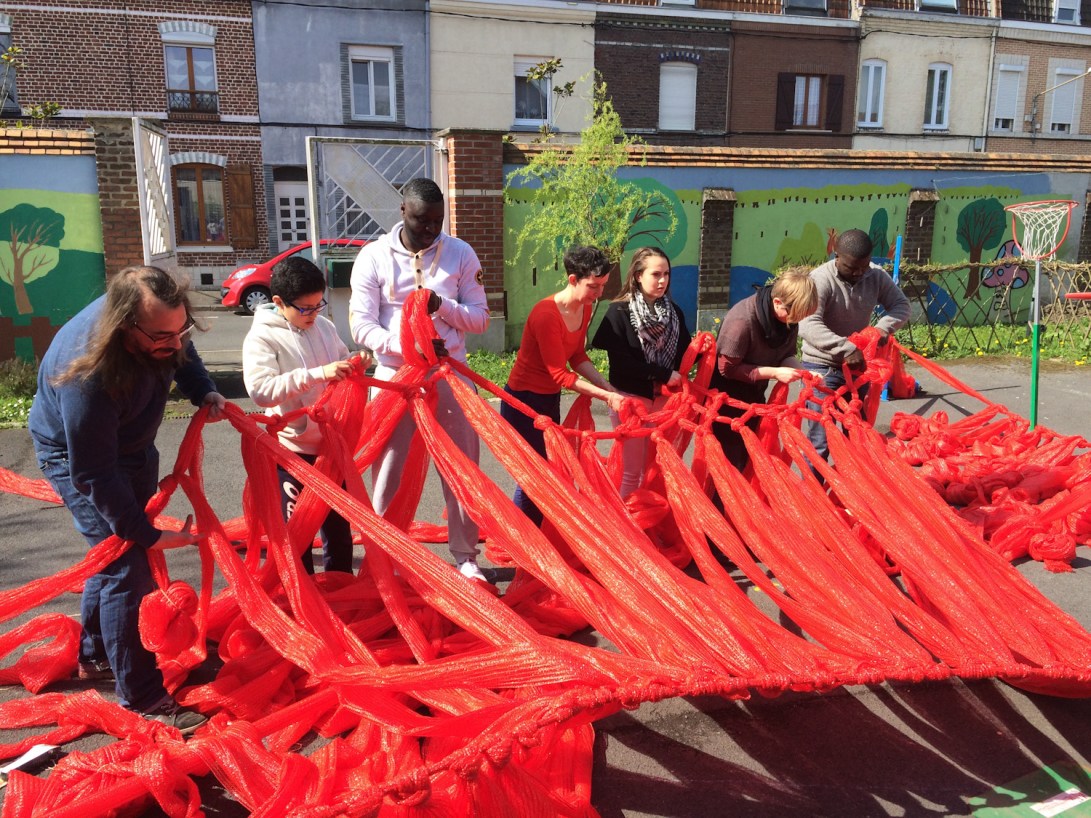 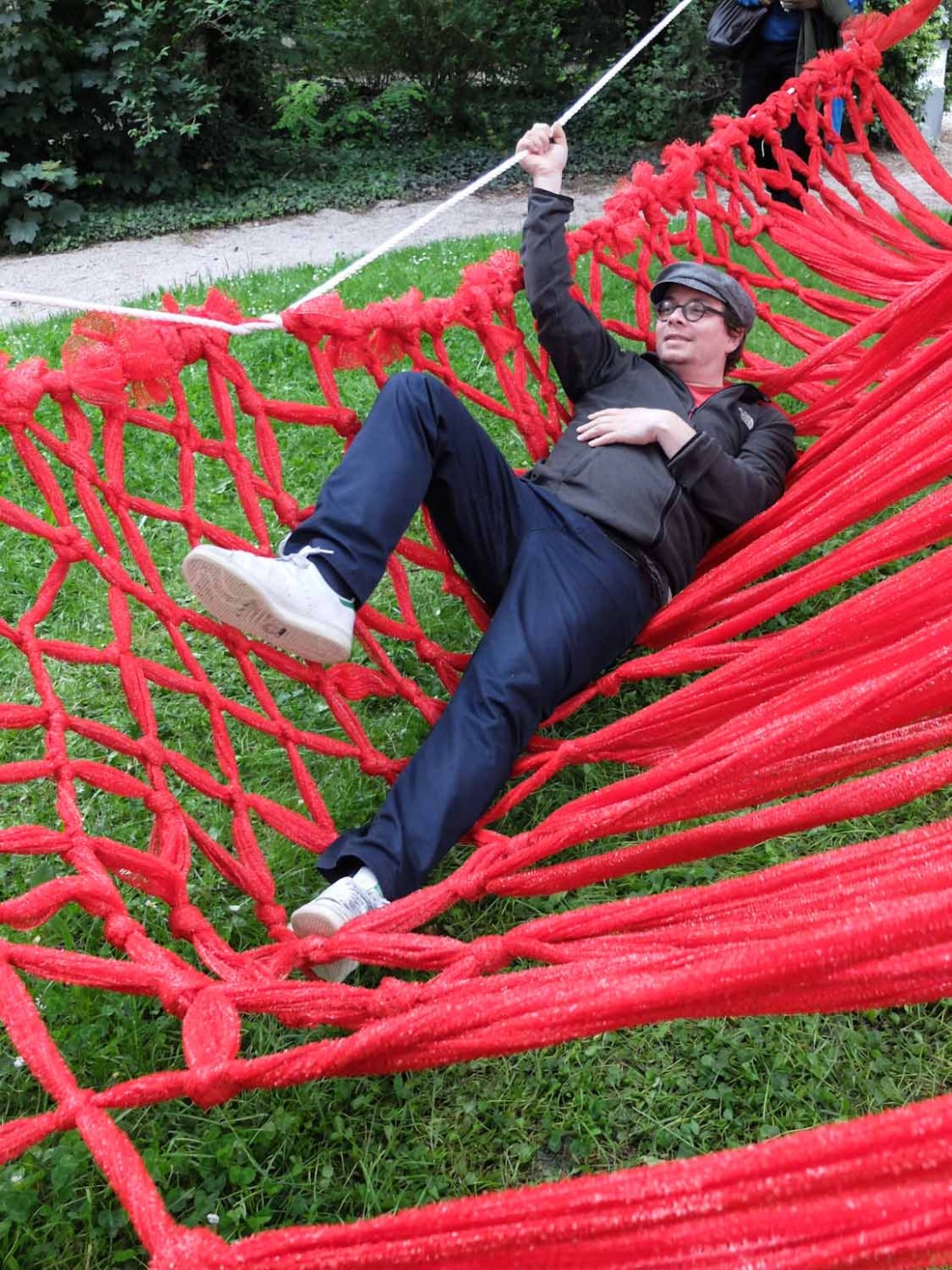 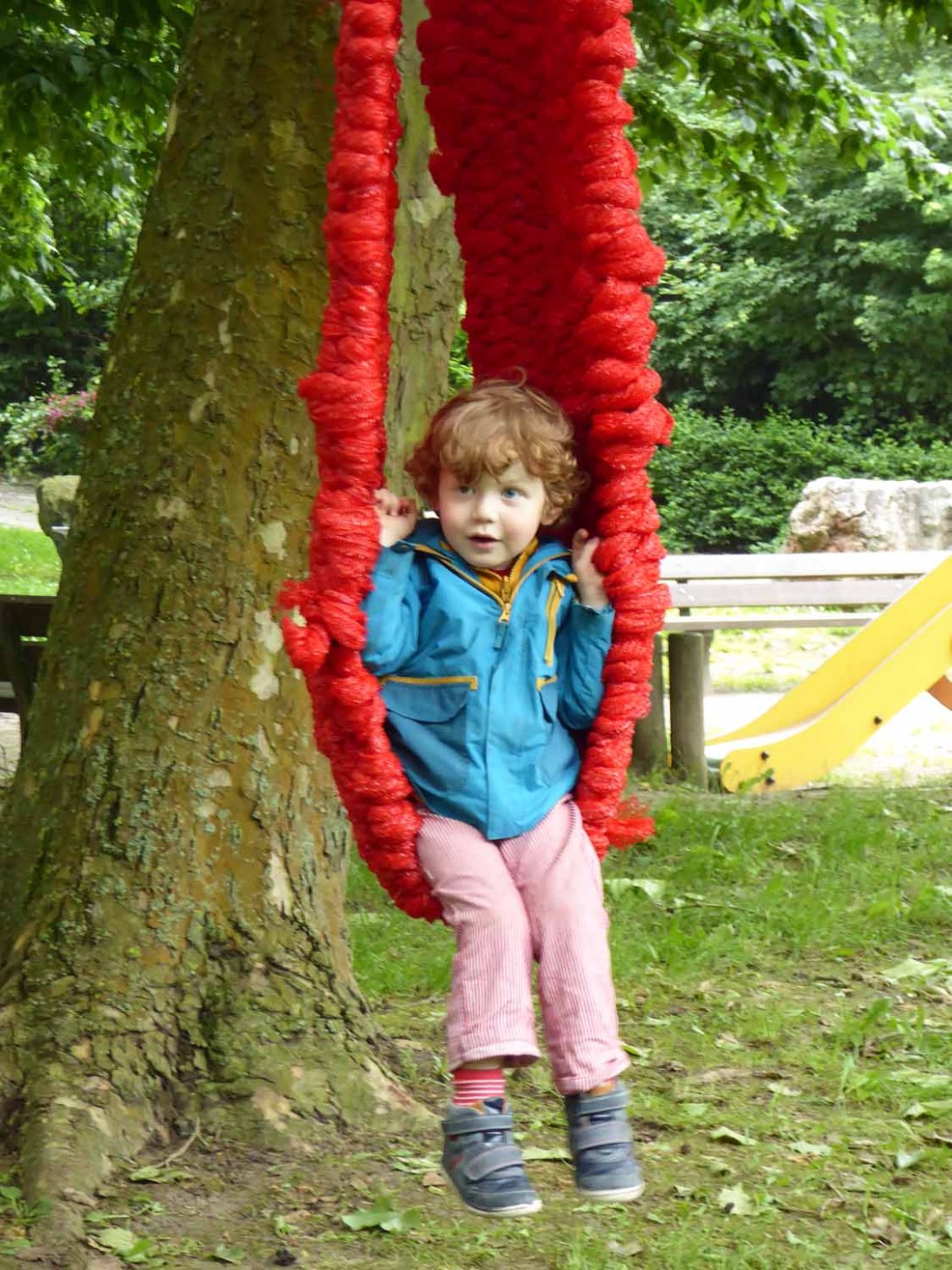 Knitted without needles and woven on the Red-Bar by the pupils of the local art course, the Red-Thread leads through the Public Garden, along the main road dividing Haubourdin from East to West. 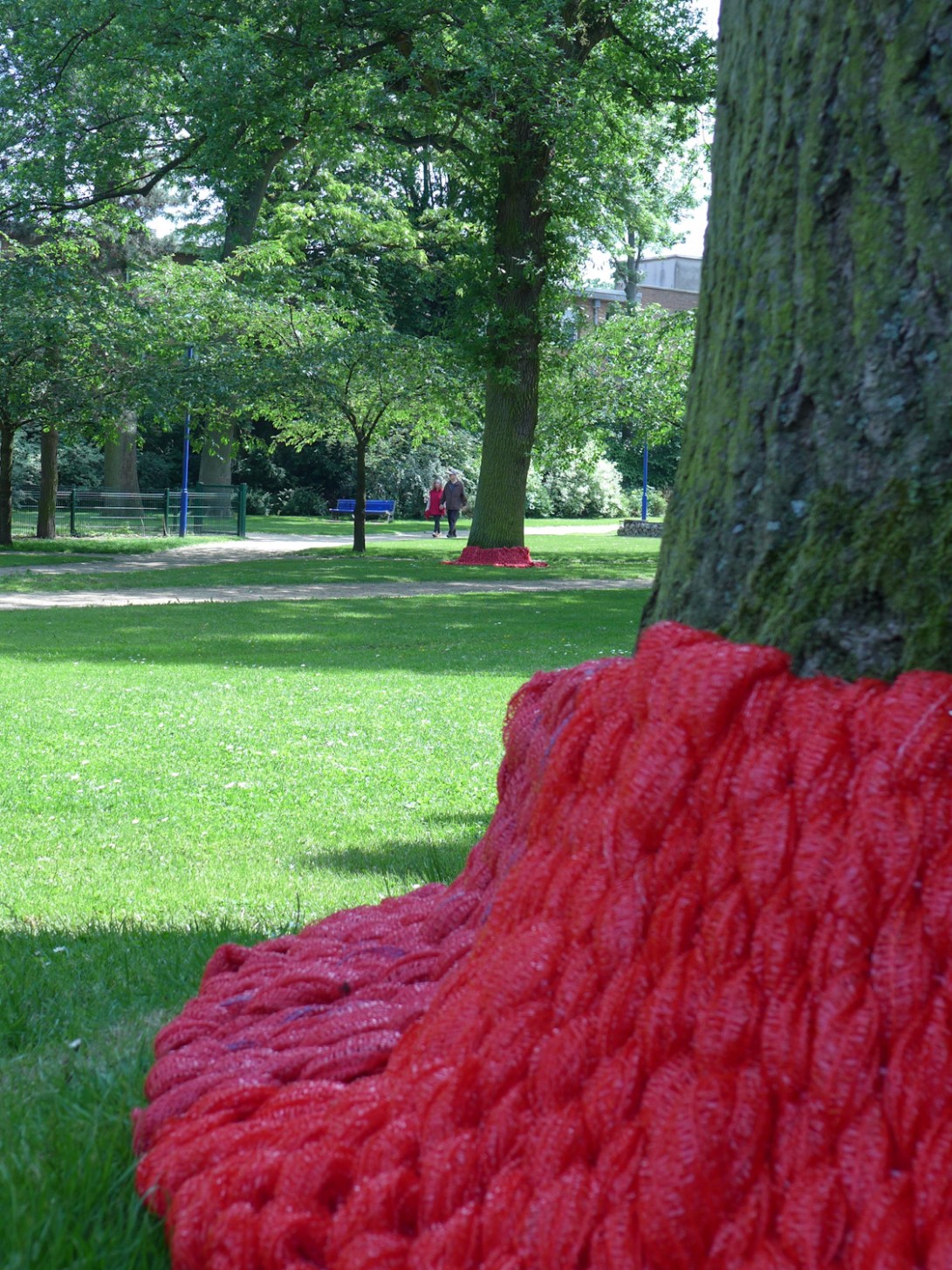 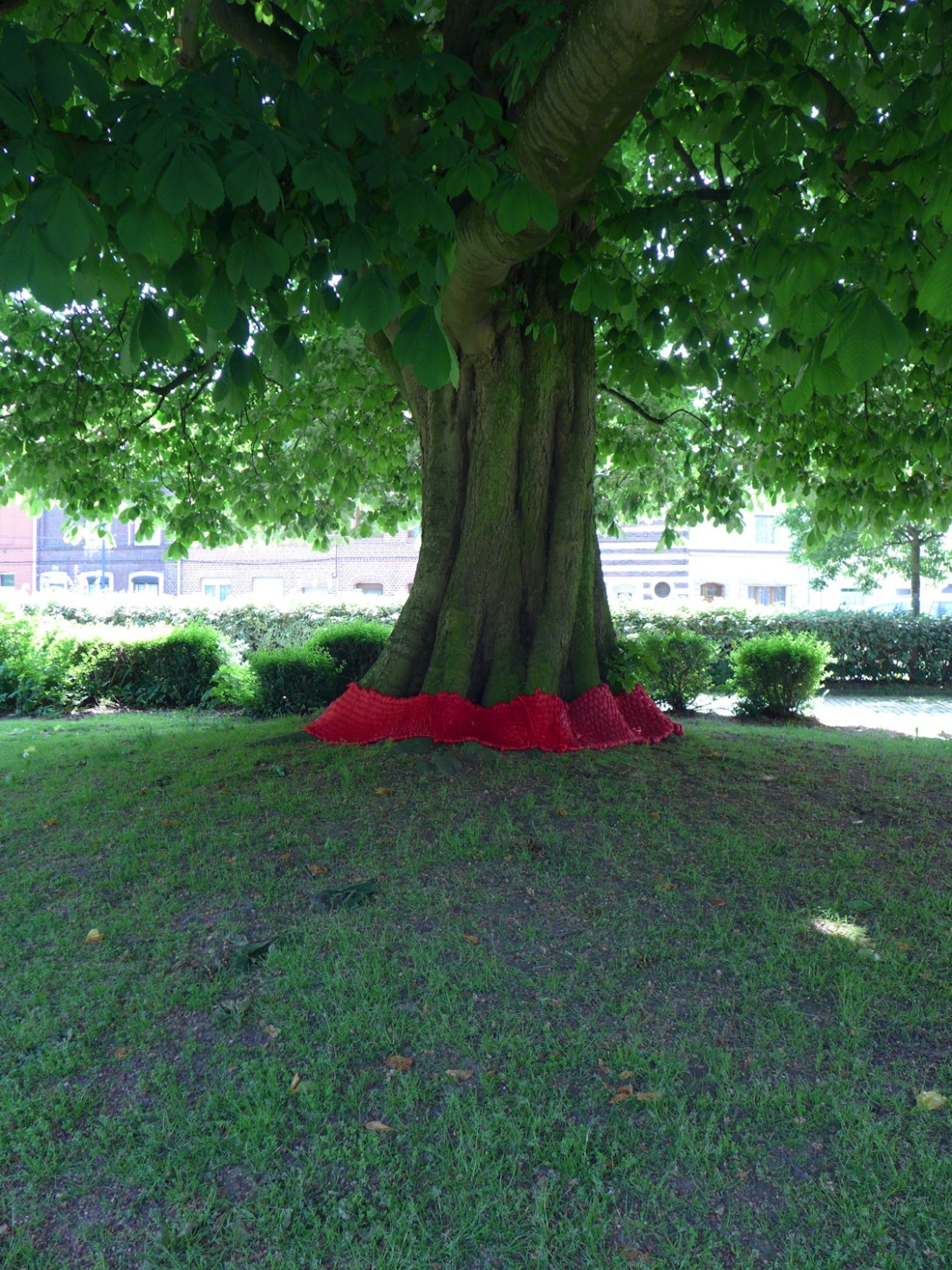 Our own rouge-bar version installed on the avenue of trees leading to the Ferme du Bocquiau. 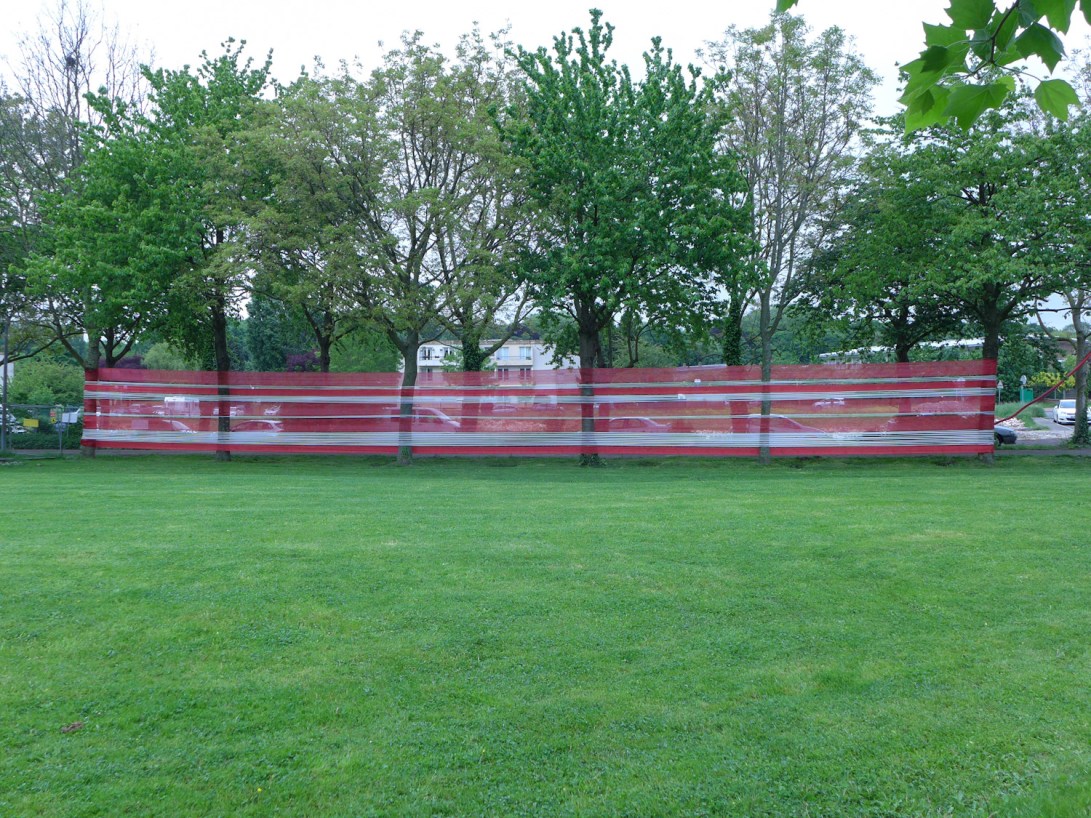 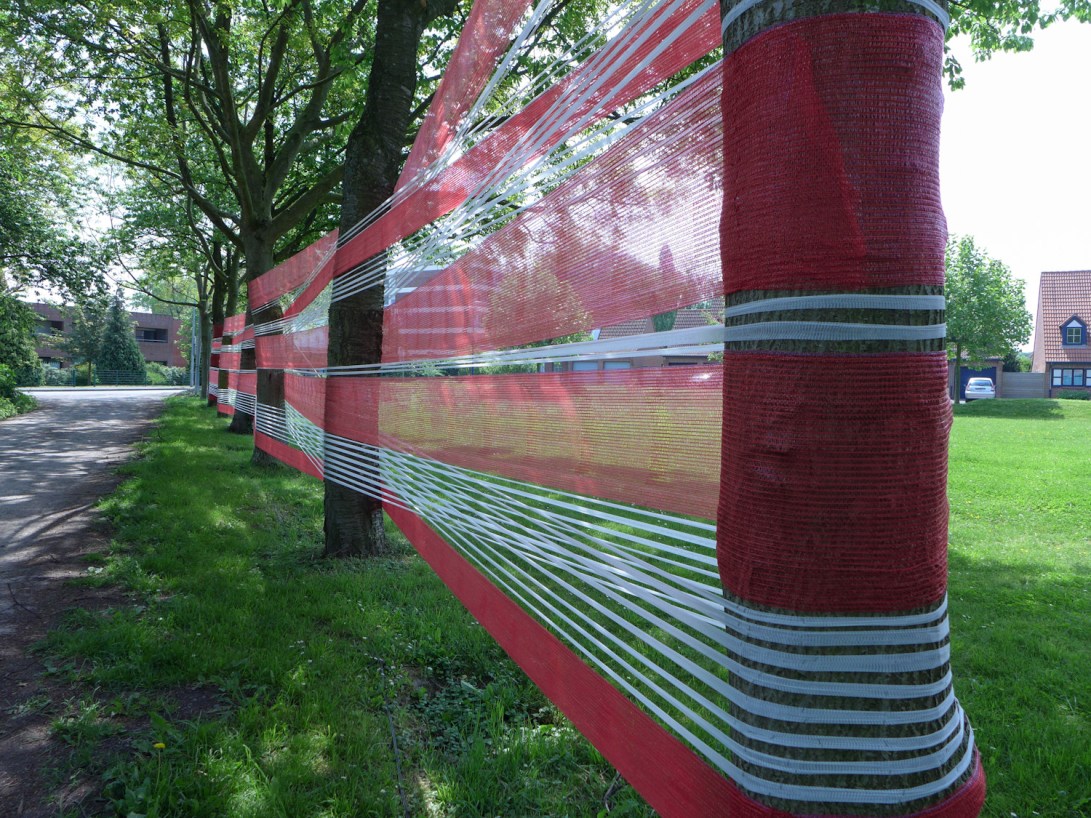 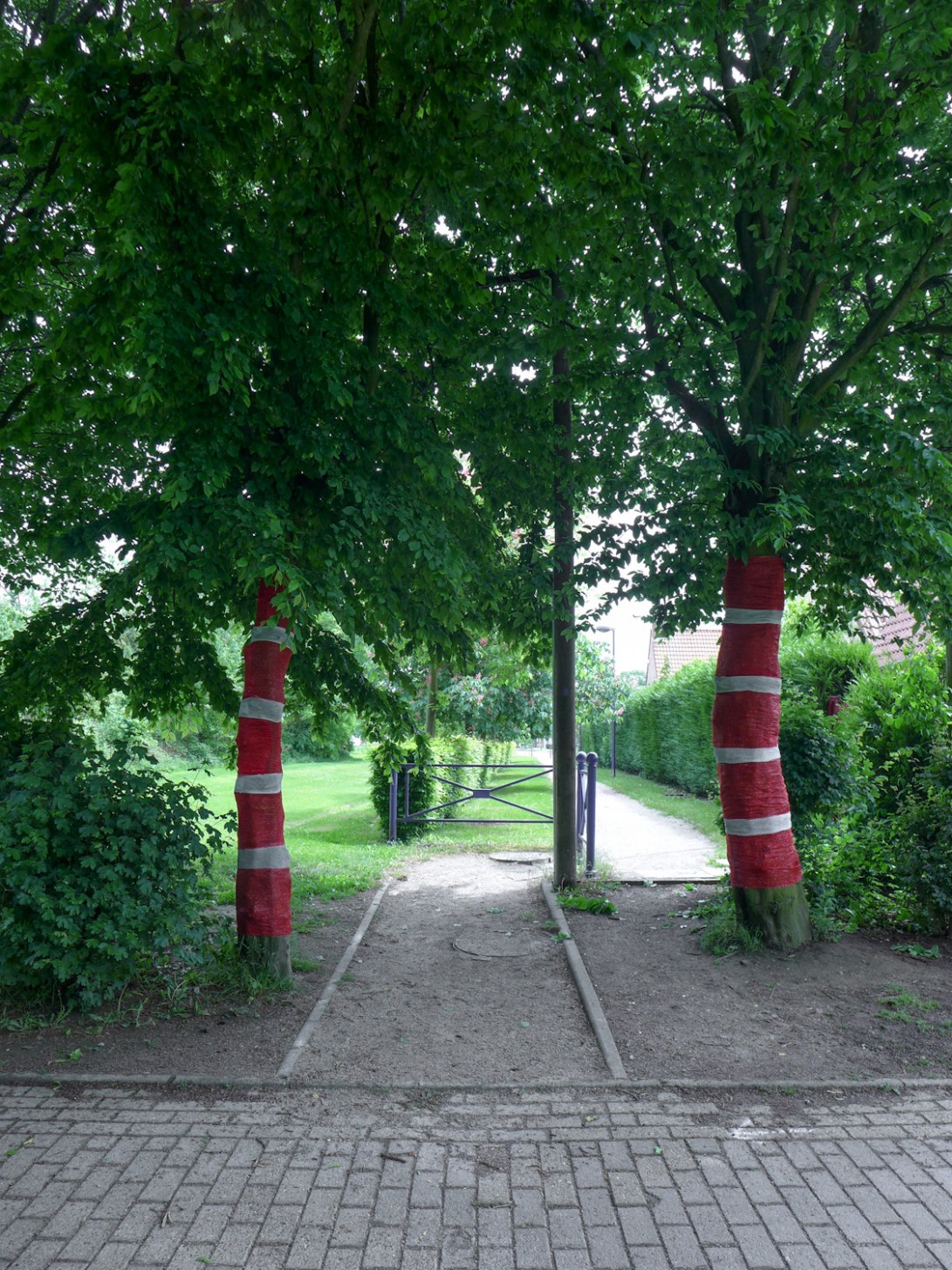 The residency was concluded by several interactive walking tours, passing in front of the different installations. To finish, all the residents were invited to a party organised by the council in front of the Ferme du Bocquiau. 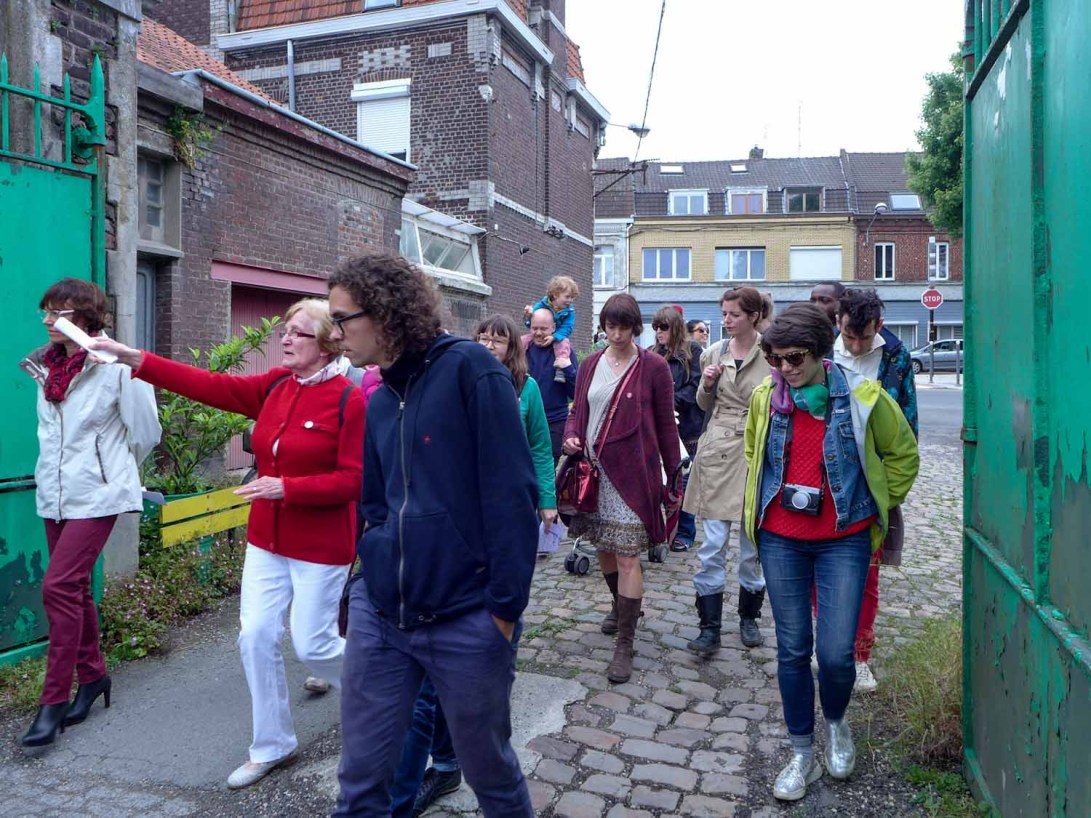 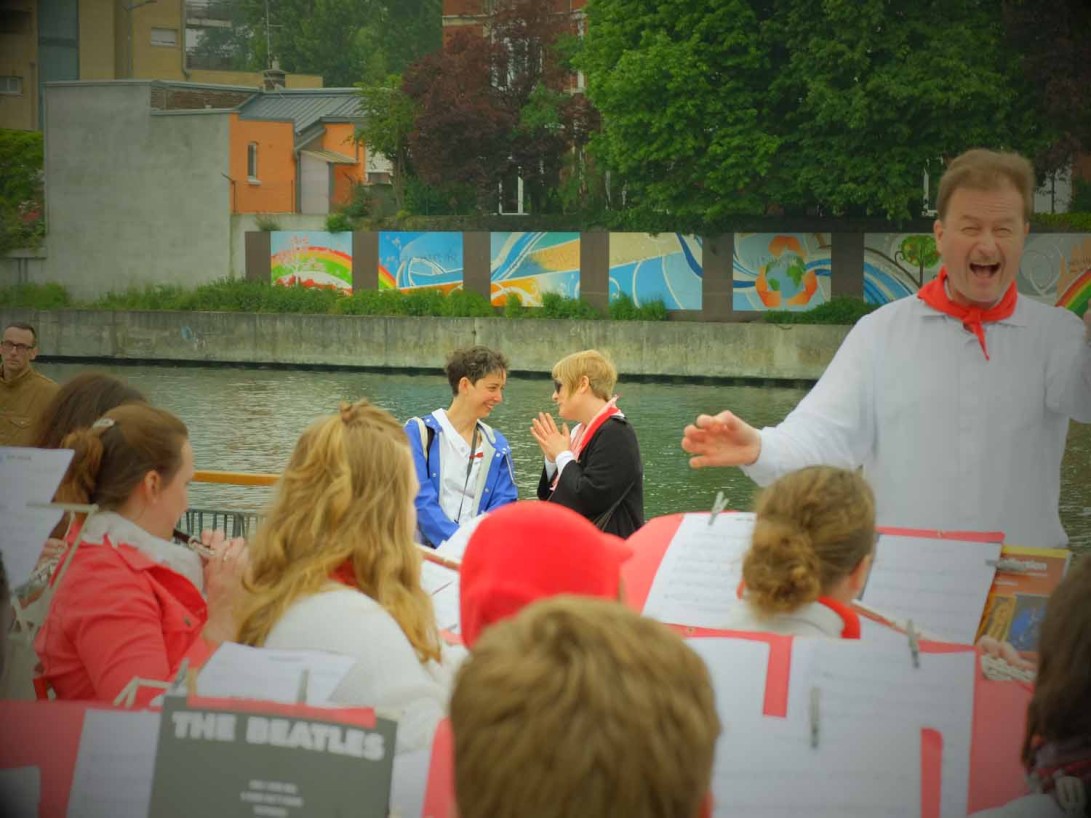 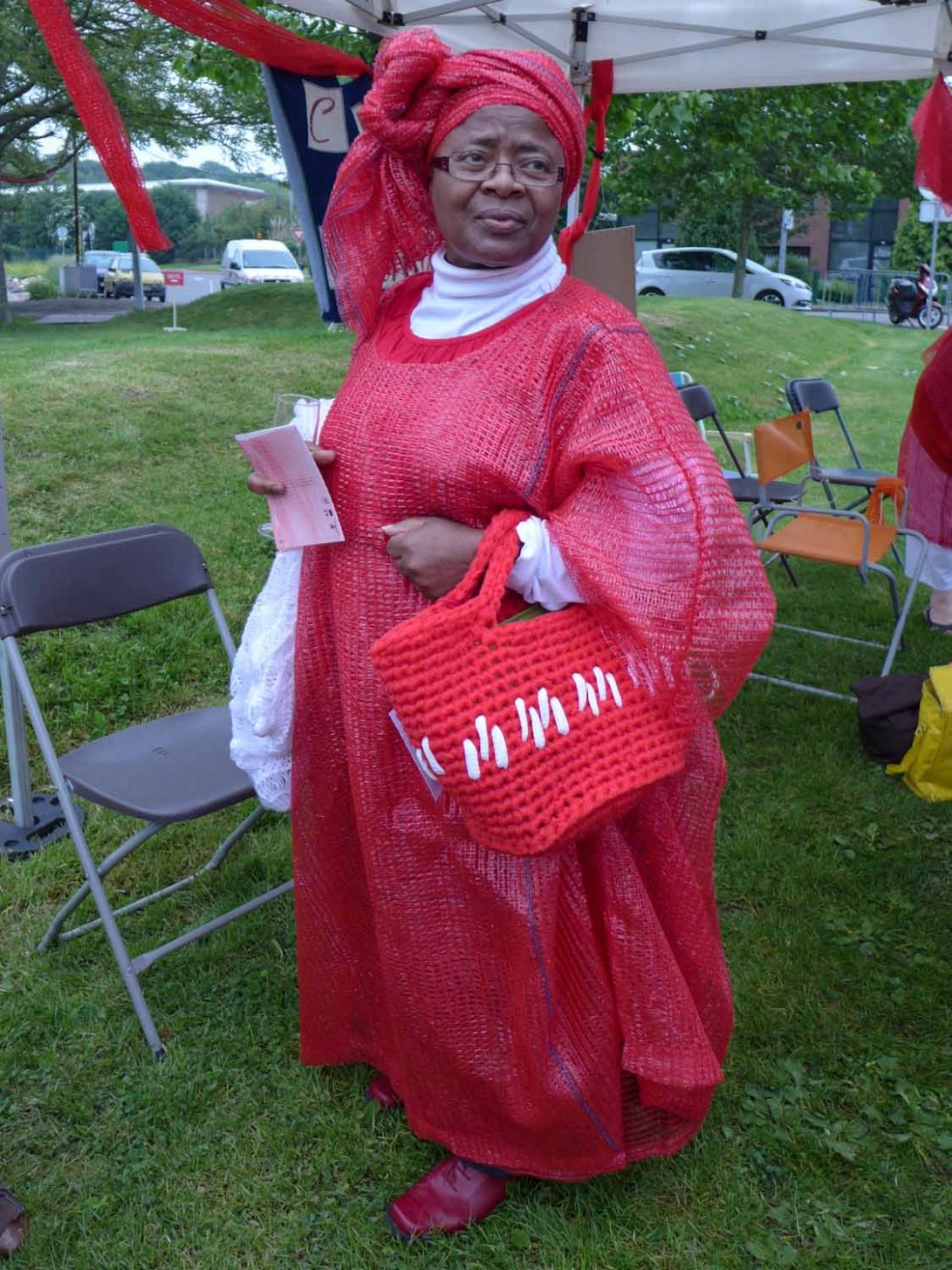 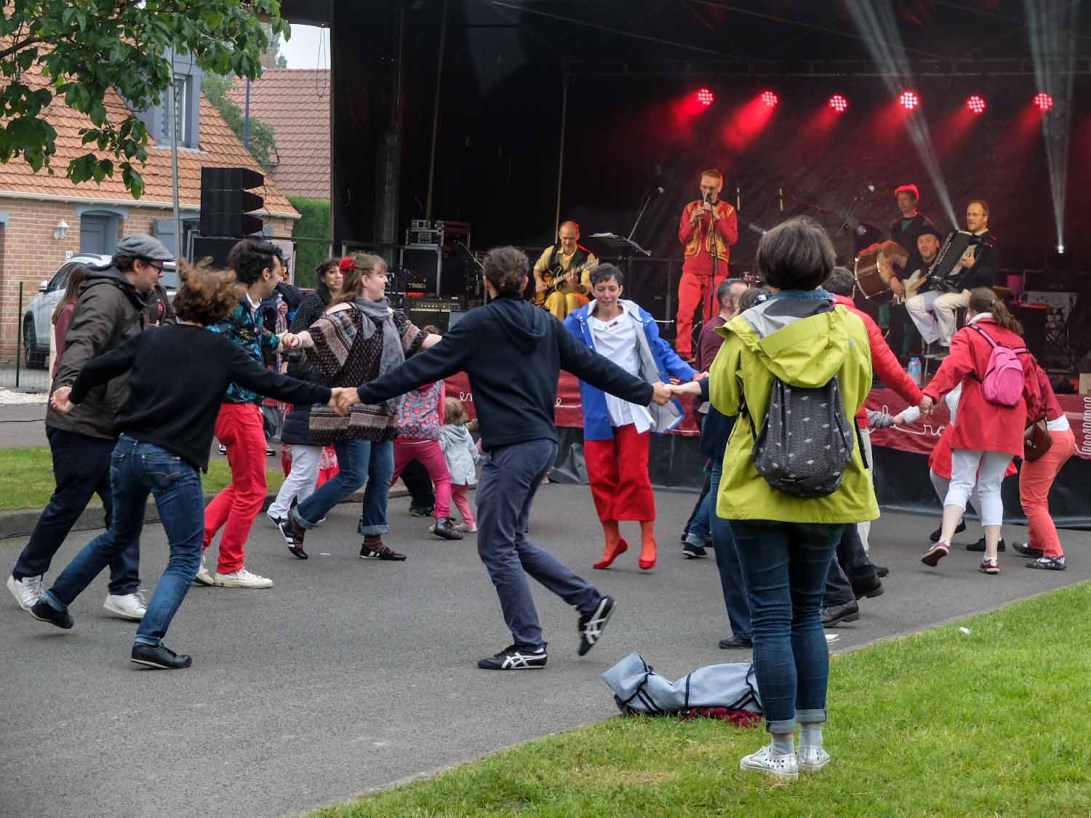