This project was based on the contrast between the negative image of the Chemin-Vert, a working class borough, and the reality we experienced. We encountered architectural richness: free spaces to reclaim, quietness, a wealth of vegetation, services and facilities, clear views and interesting architectural typologies.

With the «Archishow of the Chemin-Vert» our aim was to draw attention to this richness. We created symbolic gold nuggets using golden survival blankets, postcards and card games to make noticeable parts of the city which had previously been ignored. 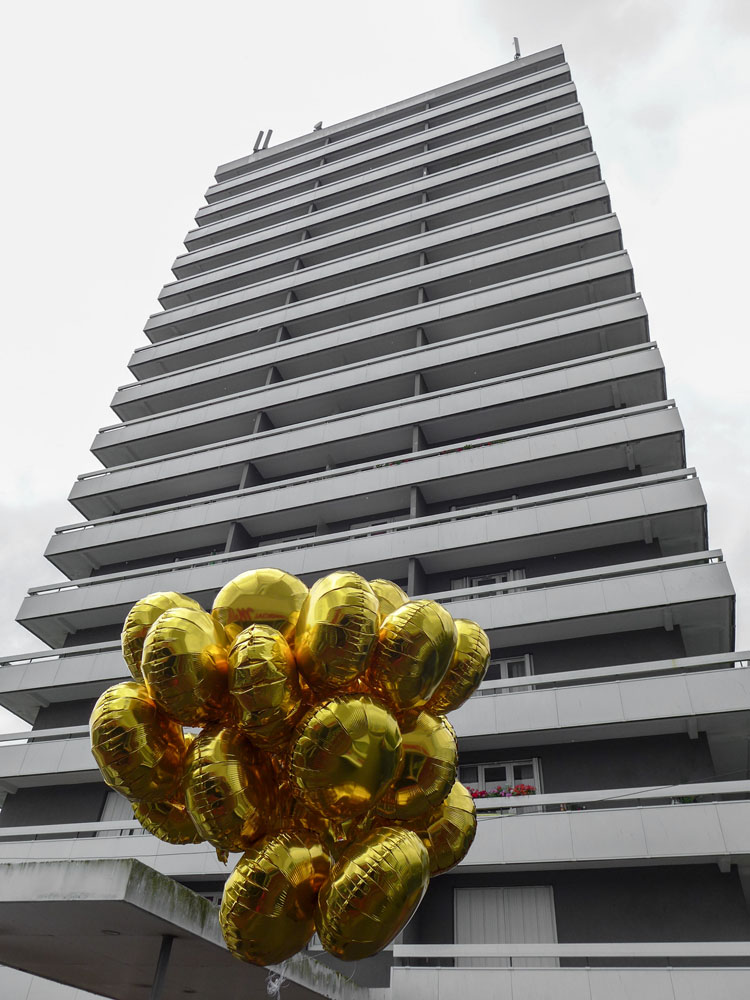 Eight similar and uniform social housing towers are a strong symbol of the Chemin-Vert, mostly built in the 60’s. They are the only visible part of this district from the ring road.

With the help of the residents and the caretaker we were able to wrap the facade of one of the towers in gold.
This action demonstrated the power of collective mobilisation. 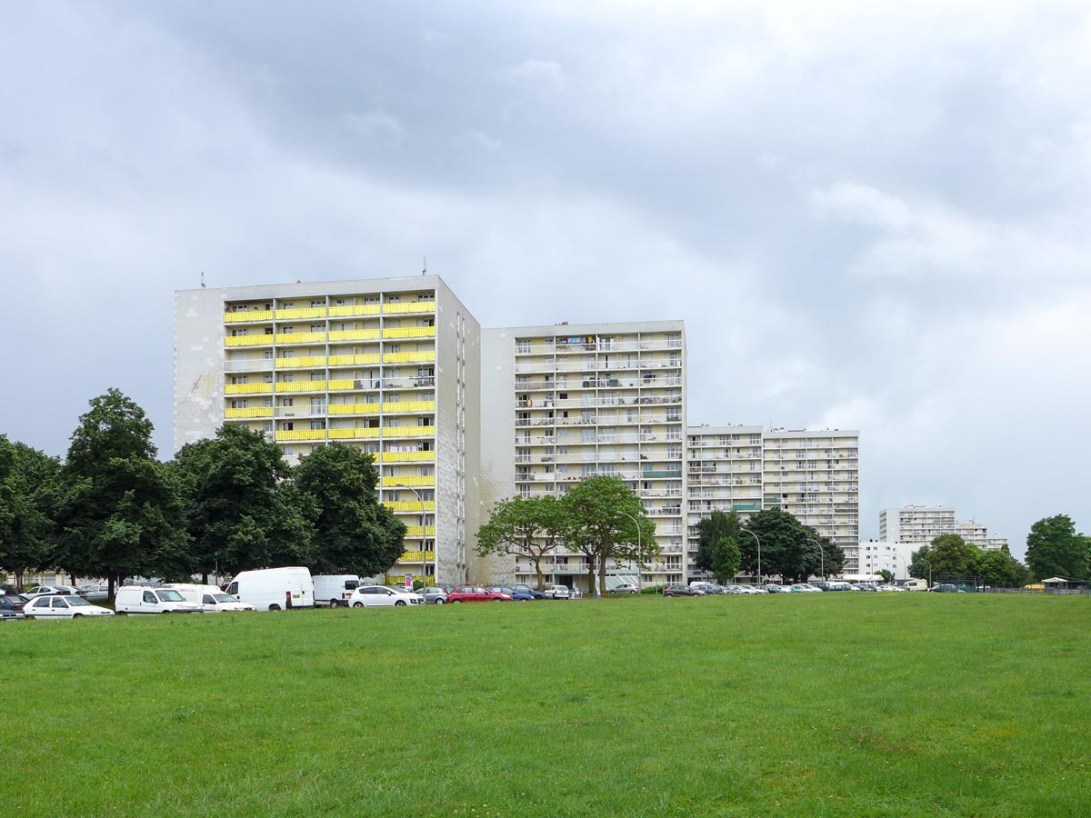 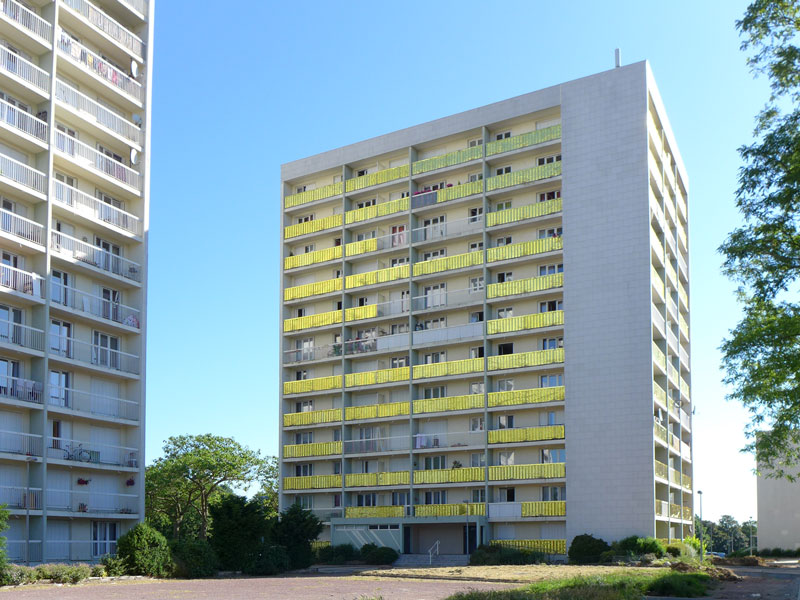 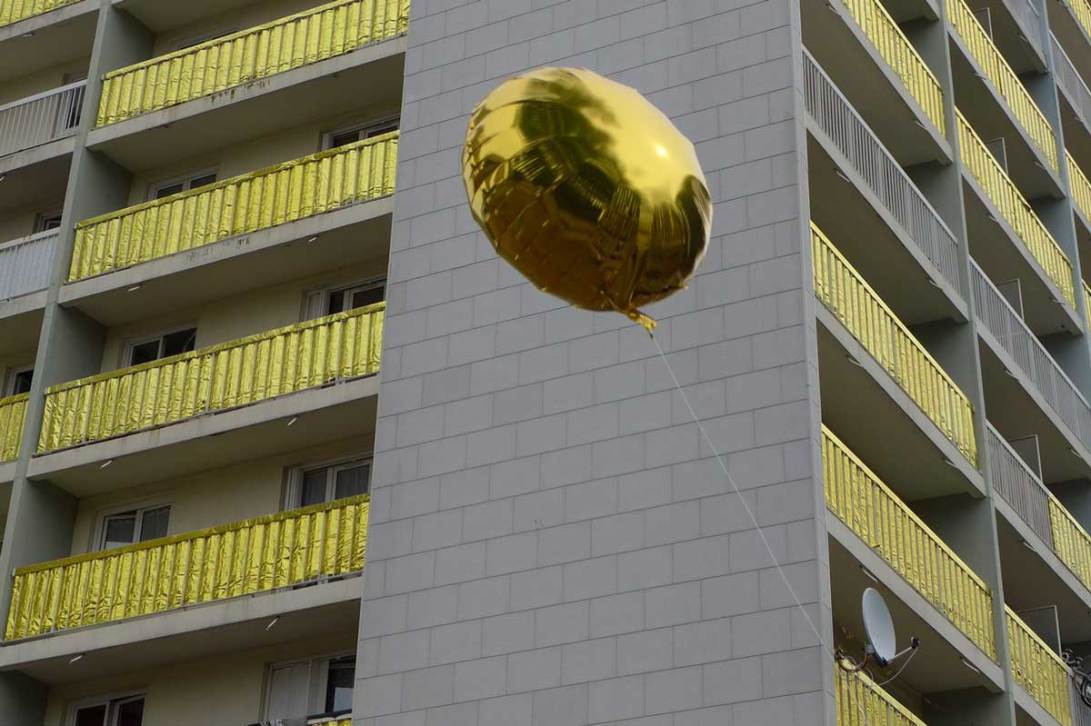 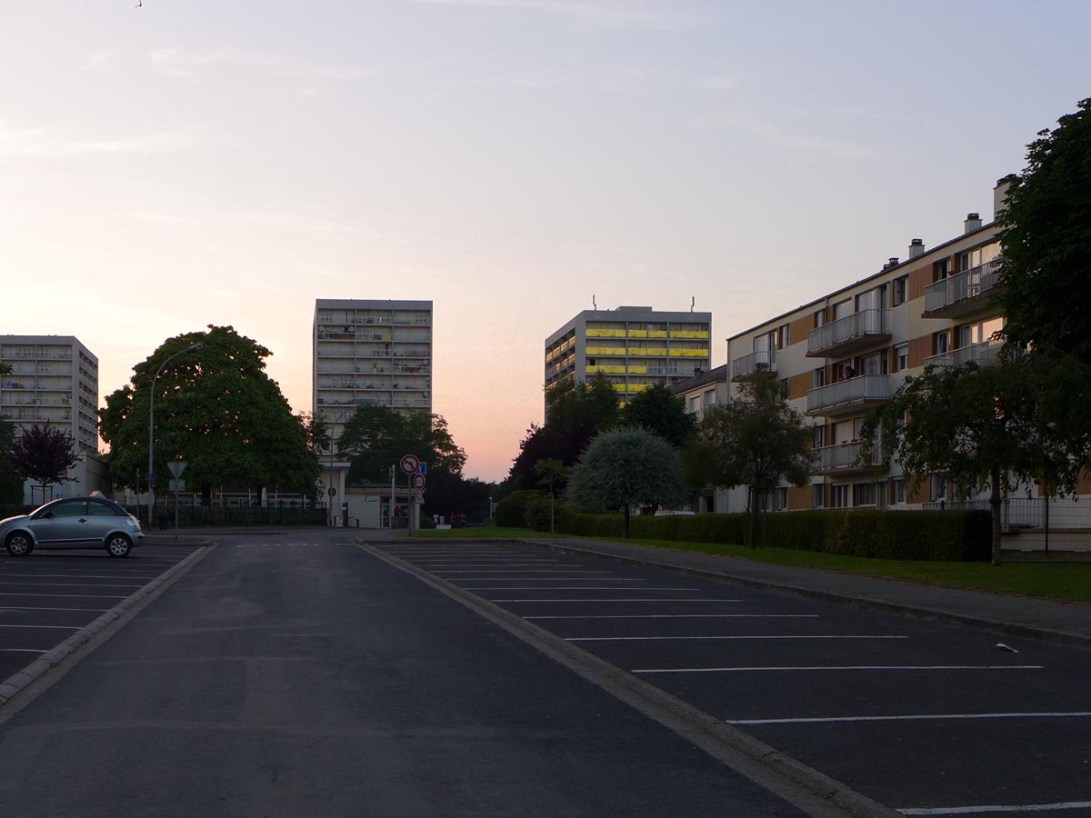 A lot of social housing building in the district have a huge shared entrance. Even though these offer great potential for multiple communal uses, they were not used by the residents. Taking one of those entrance, we highlighted its spatial singularity by completely covering its walls and ceiling with golden wallpaper. 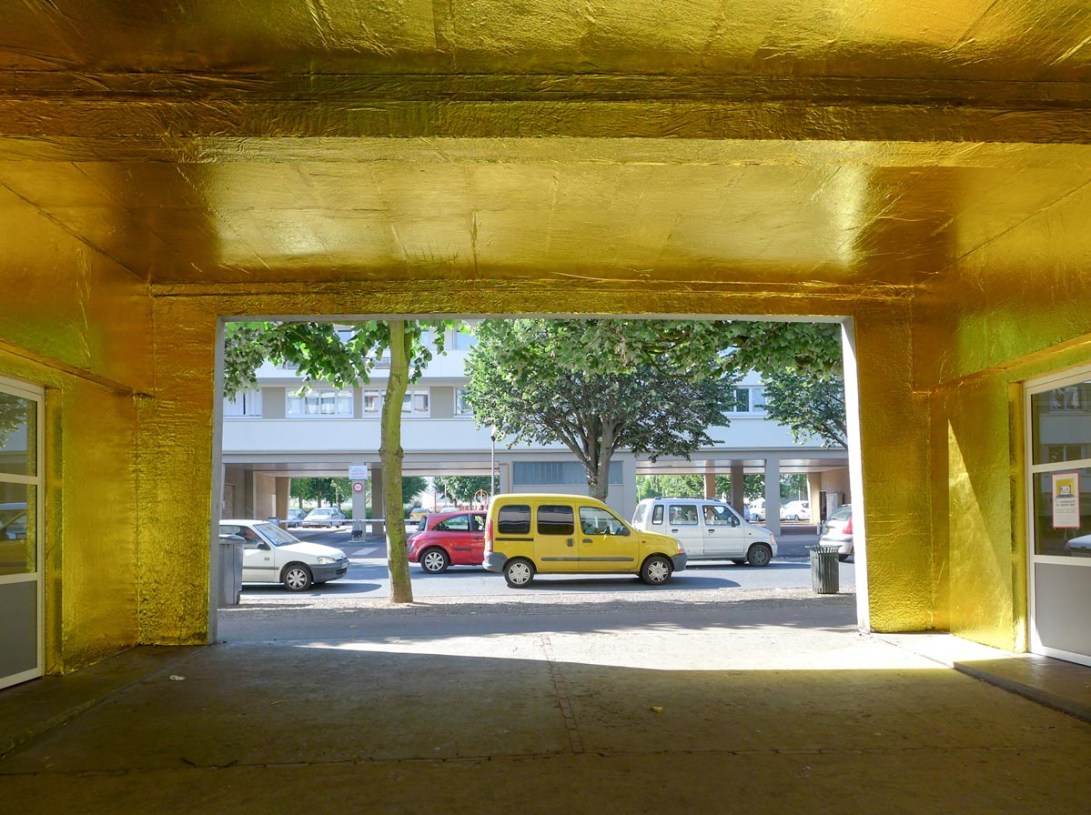 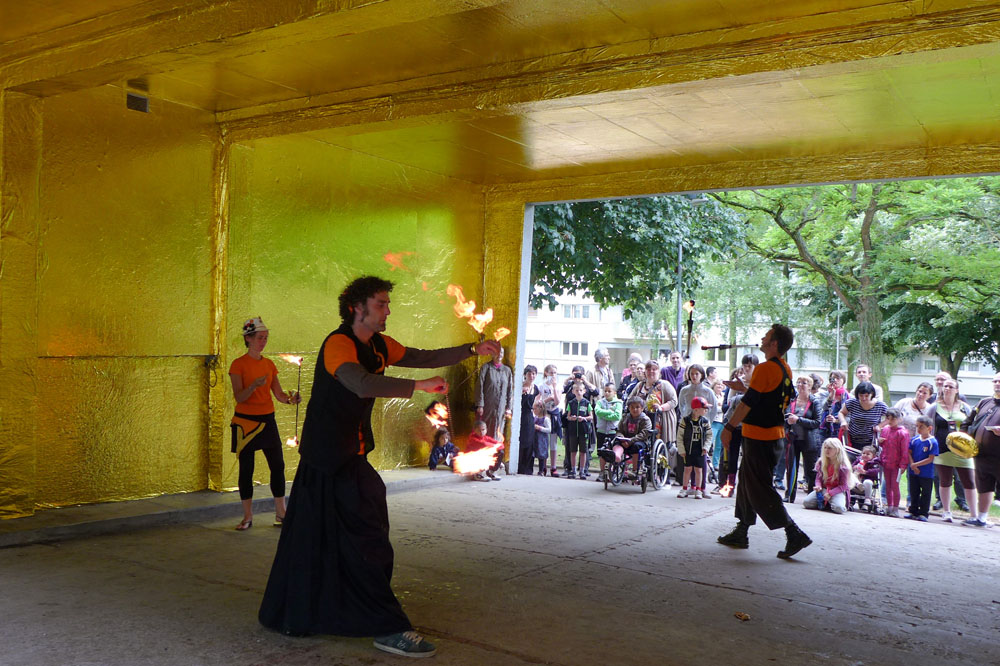 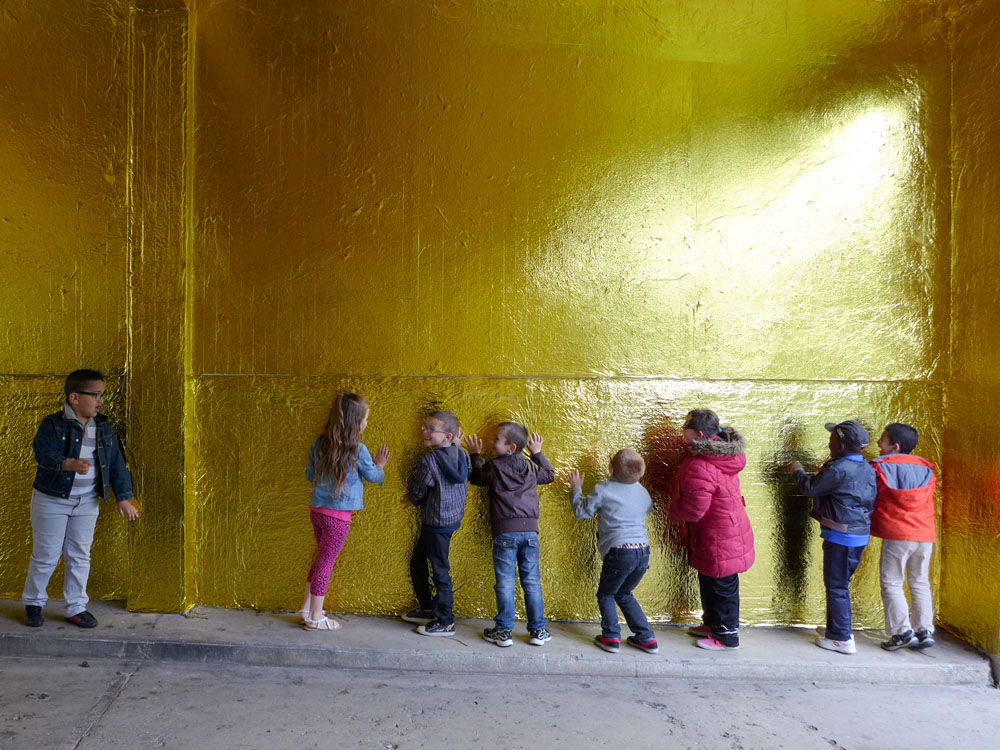 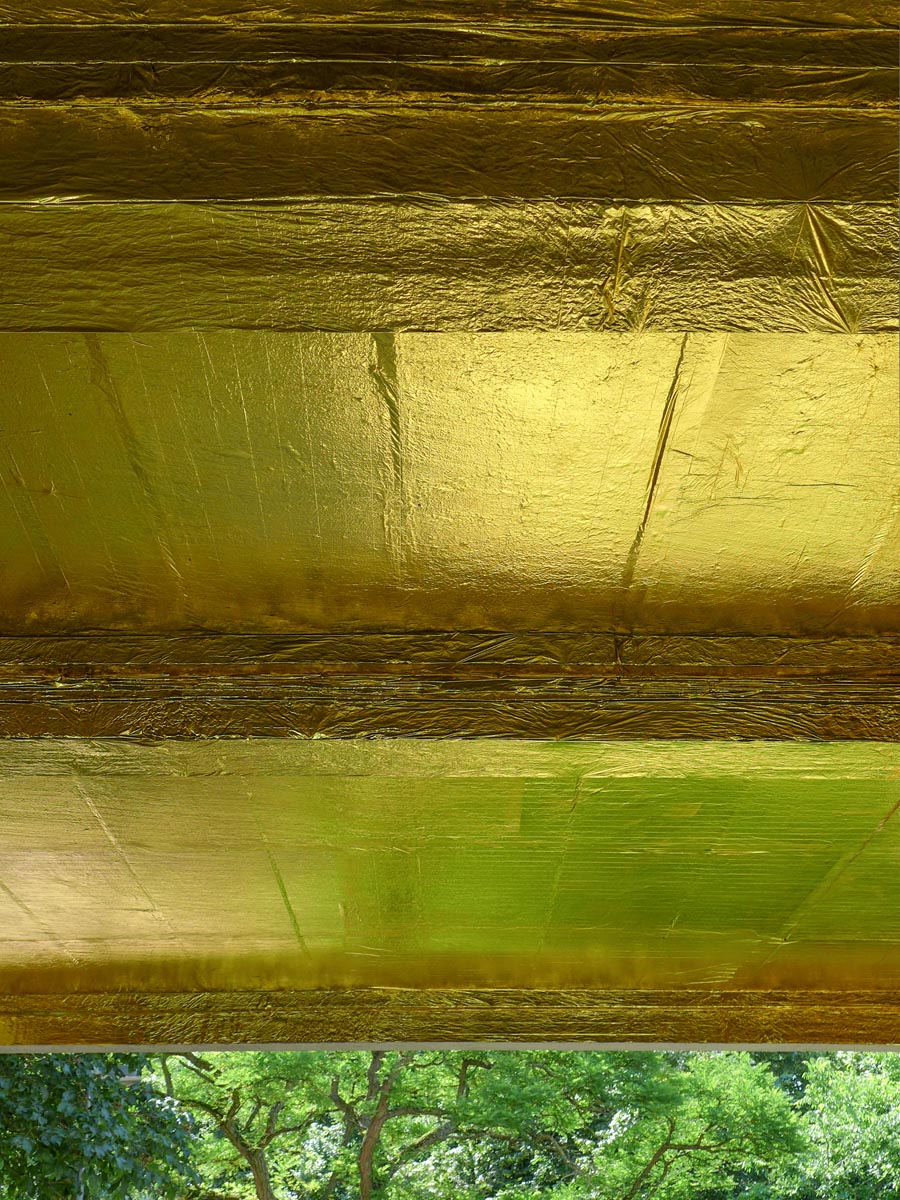 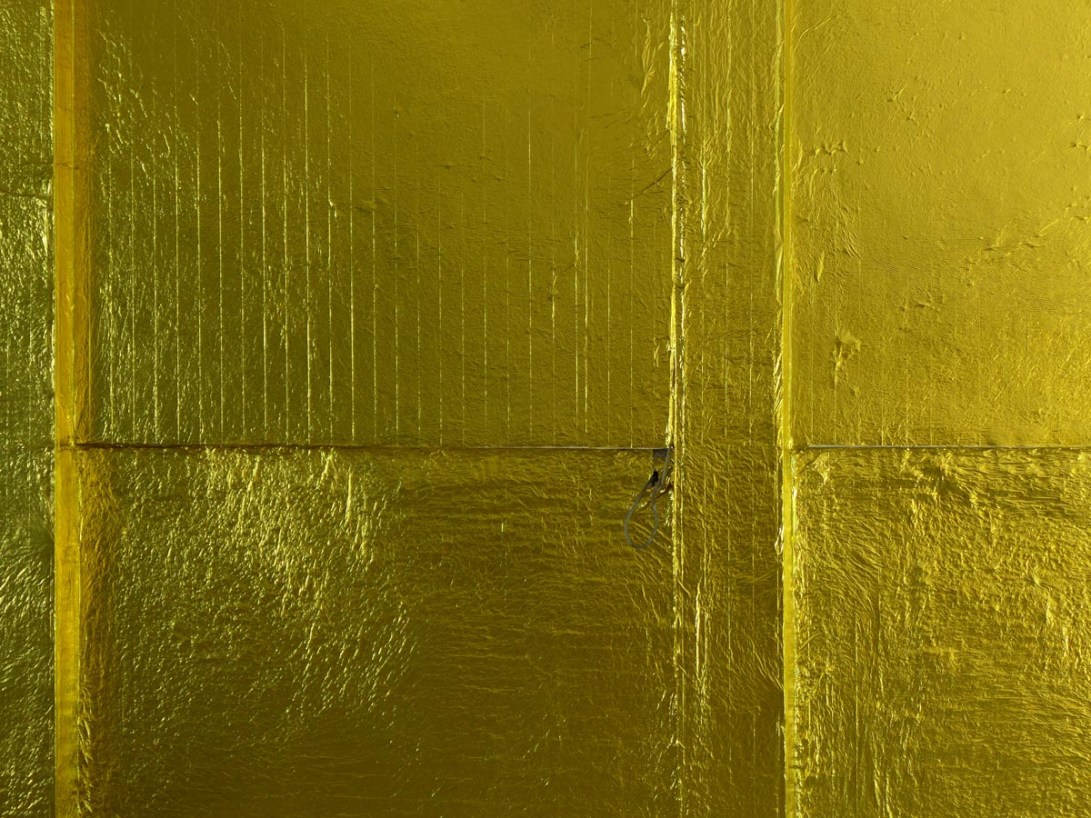 Since no postcard from the district existed, we asked the residents to design their own, which we then produced.

We first prepared a serie of postcard templates, based on this area’s architectural hallmarks. As we were moving our mobile postcard office through the city, we invited the residents to design their own tower facade, entrance porch, tower roof, green area or public square.

We also offered our own postcards, based on our vision on the Chemin-Vert: the district centre tower, the eight housings towers, one of the shared entrances, and a map of the district’s gold nuggets. 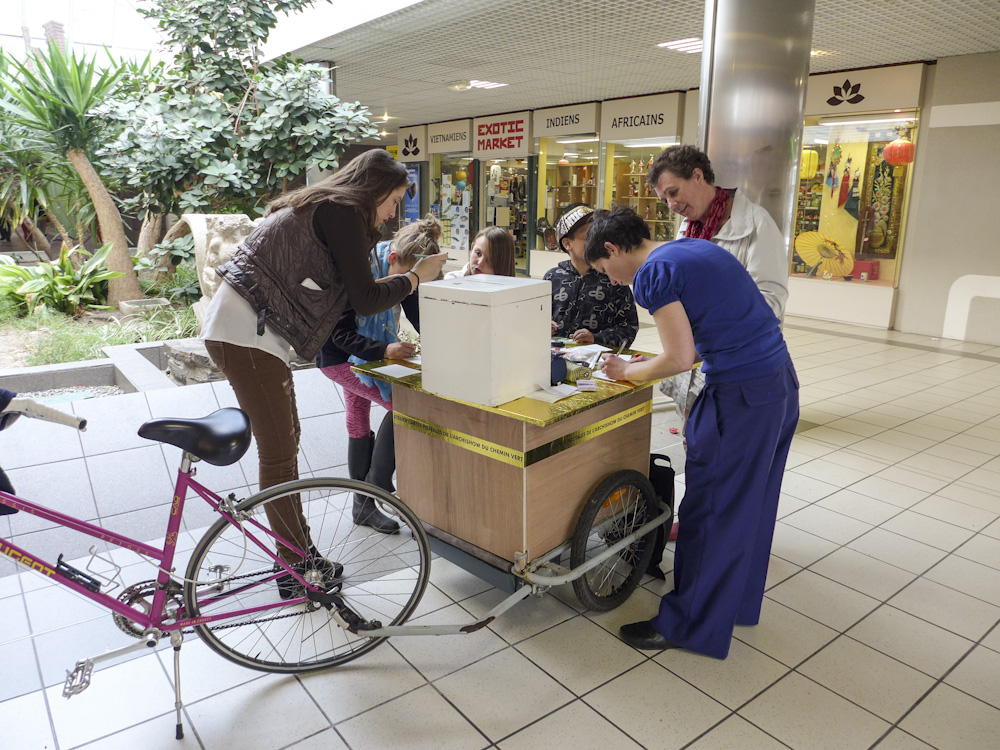 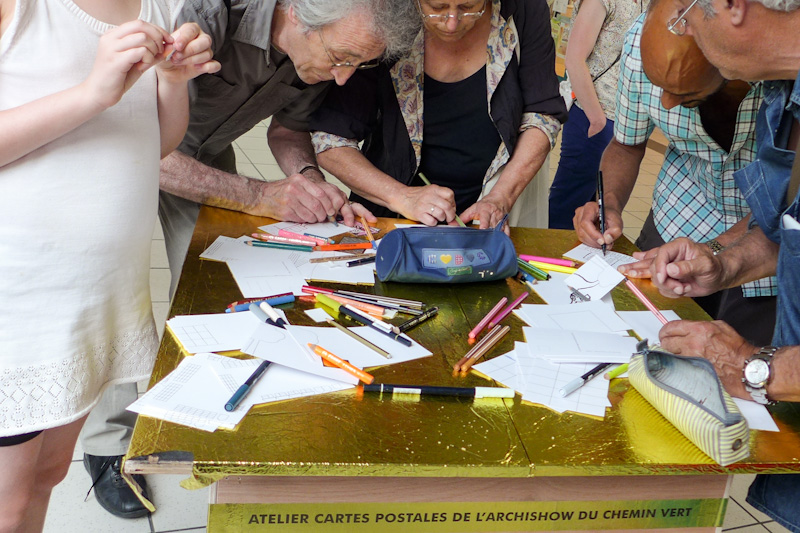 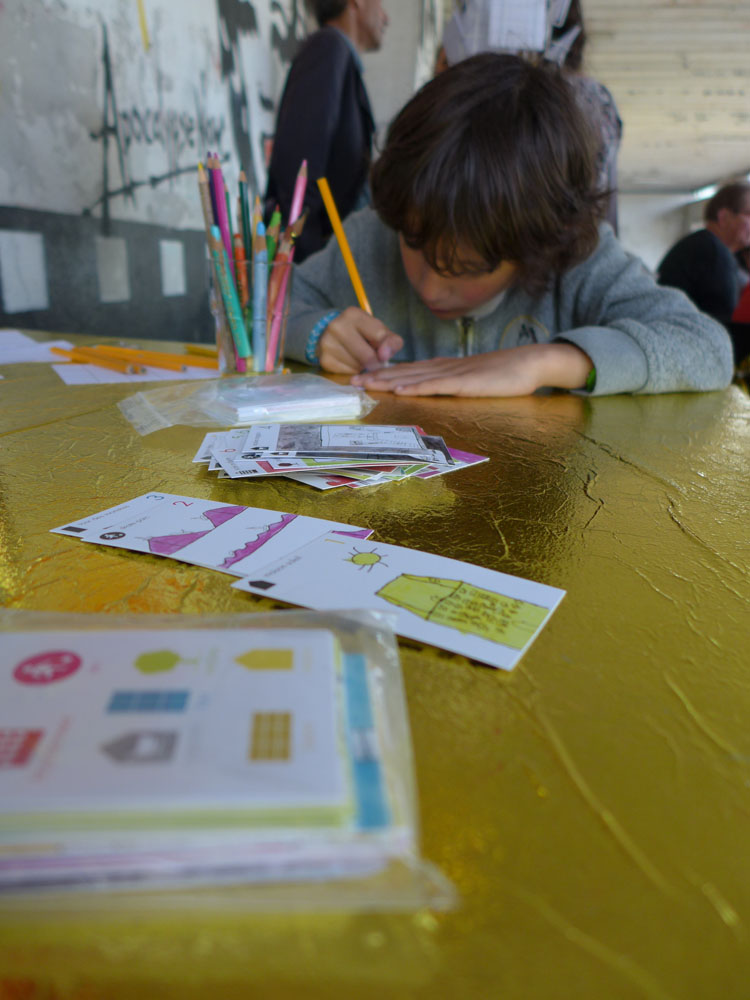 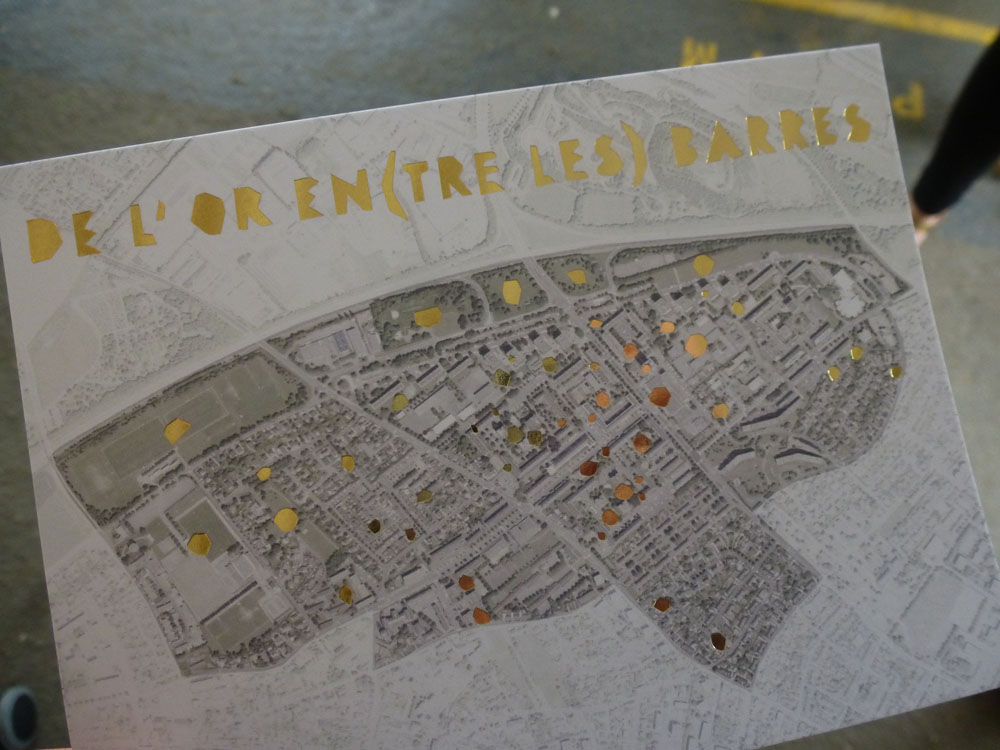 Workshops with two Primary school classes were organised around the card game Happy Families, in order to establish a familiar and playful base.
Before an introductory walk-through of the district, we proposed our own version of the game, where each family represented a type of construction found in Chemin-Vert (houses, housing estates and towers, green spaces, playgrounds, shops and amenities).
For each family, the children imagined the six members in the shape of drawings.
Following the workshops, 400 copies of this card game were printed and distributed in the other schools in the city. 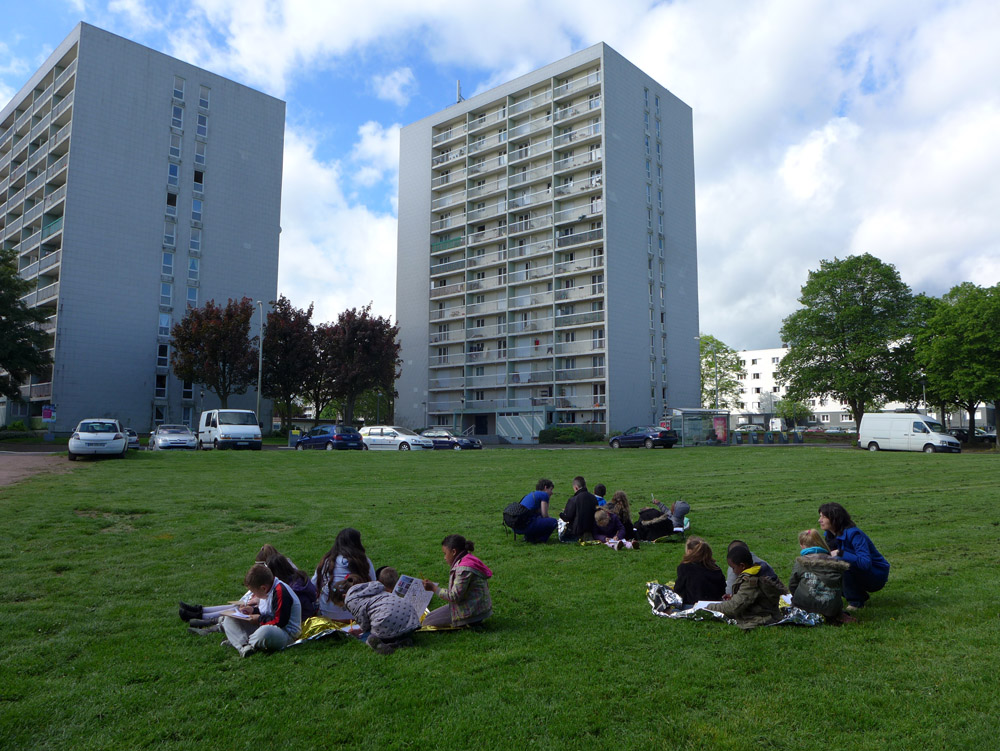 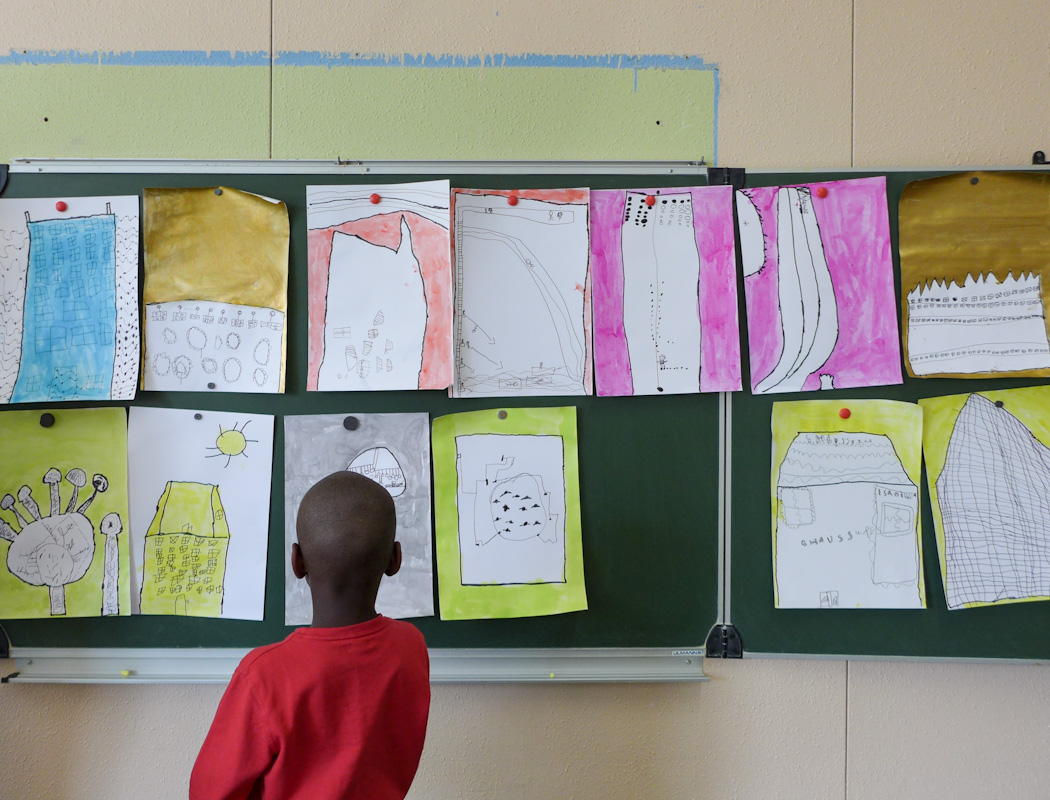 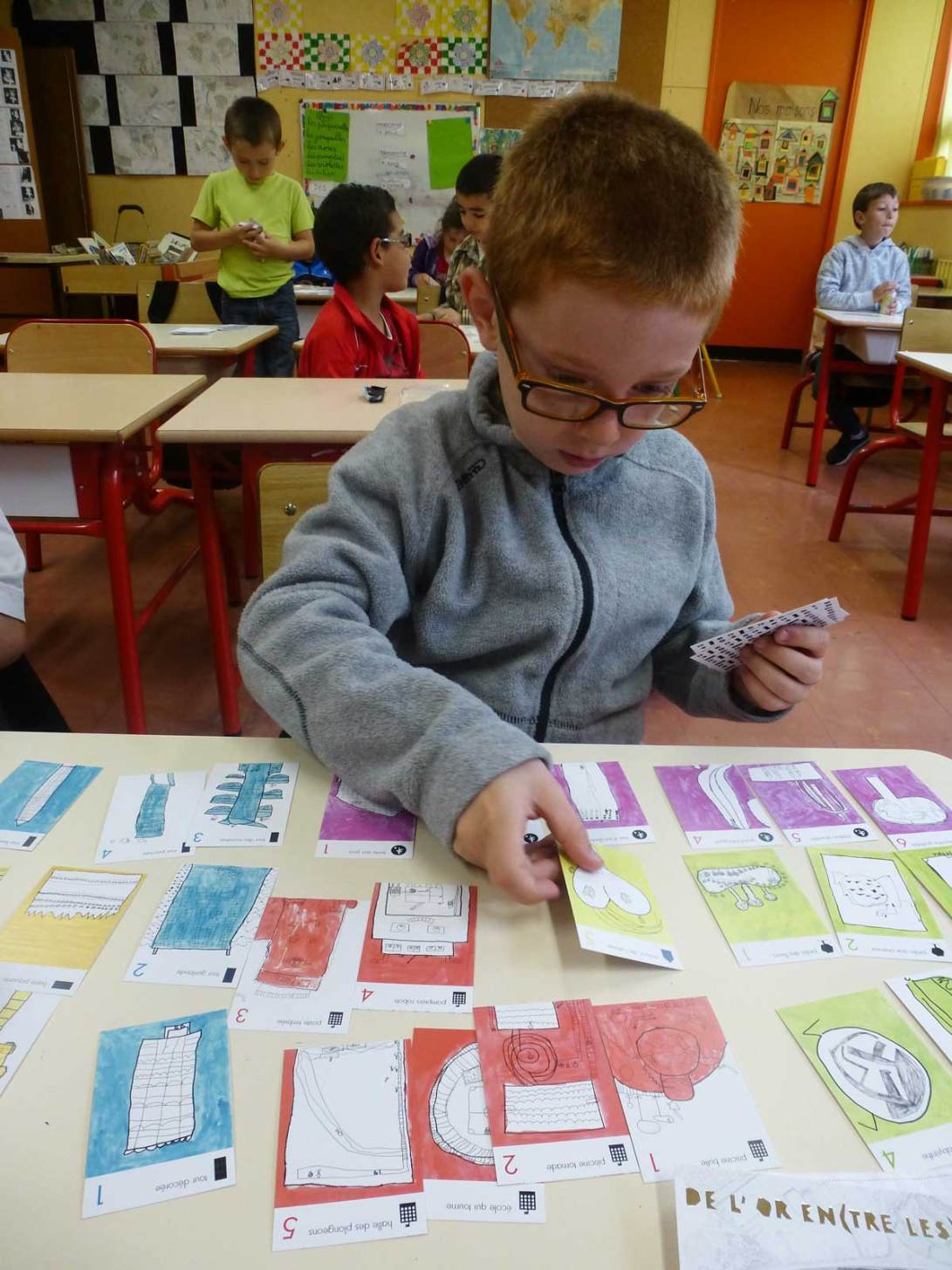 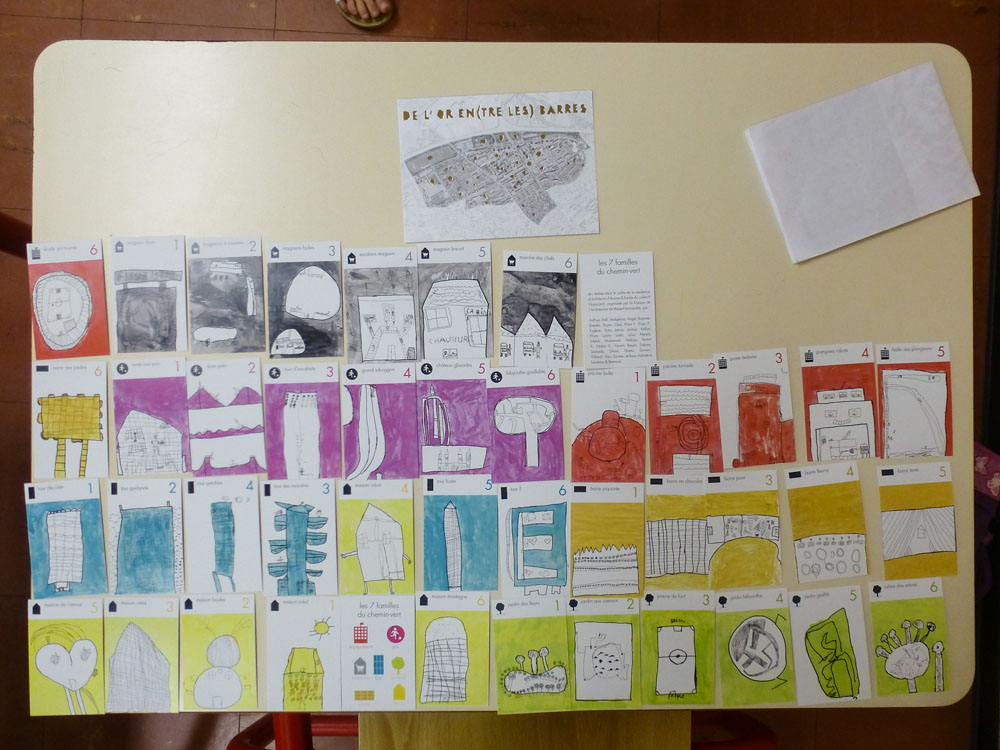 The closing event comprised two walks through our different installations.
Due to the lack of a public meeting place, we decided to occupy part of a closed school in the centre of the district and to temporarily use this space. Twenty golden cushions were enough to turn this huge urban wilderness space into an inhabited one and symbolise its collective reclamation.

With the support a local charity, we were able to organise a drinks party, creating a friendly atmosphere in the yard of this old school, which briefly recovered its community function. 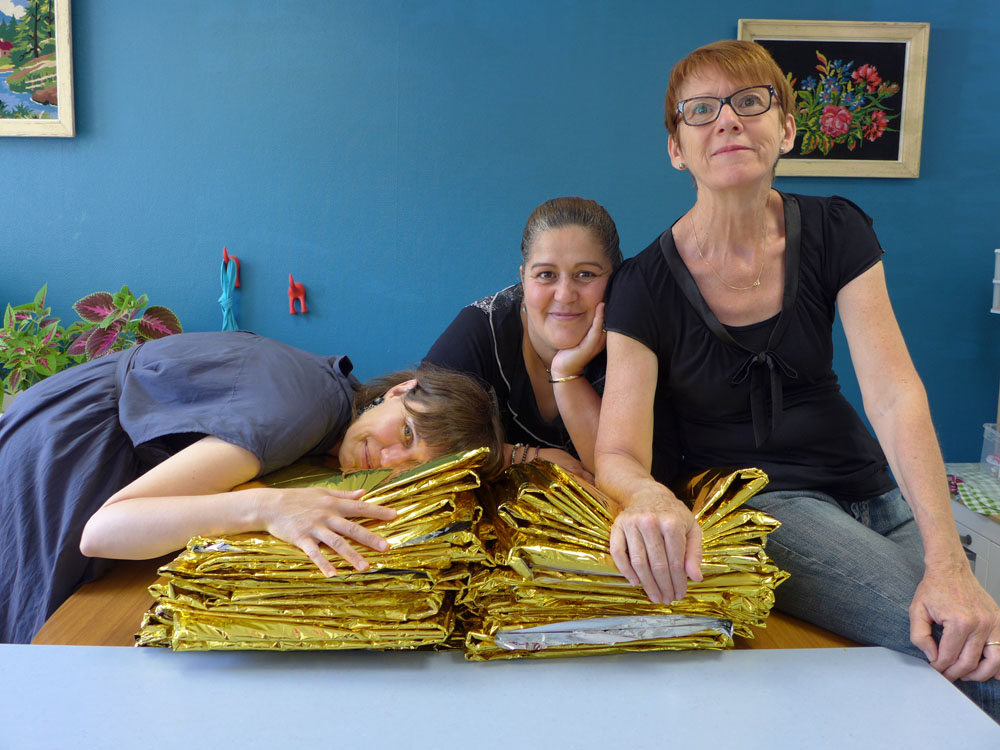 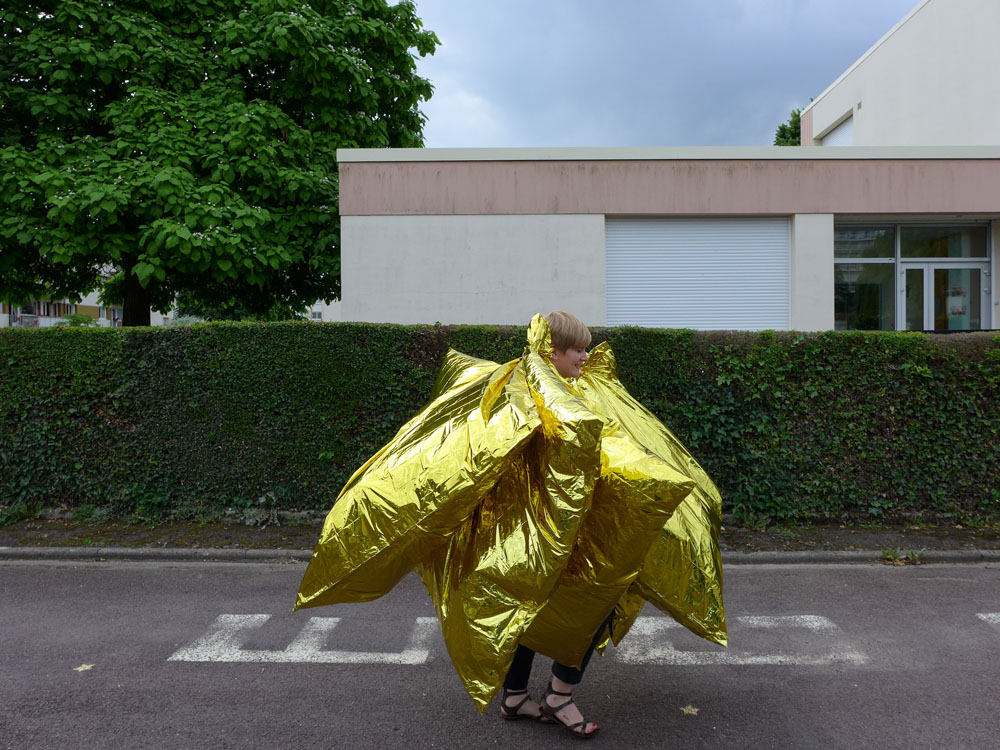 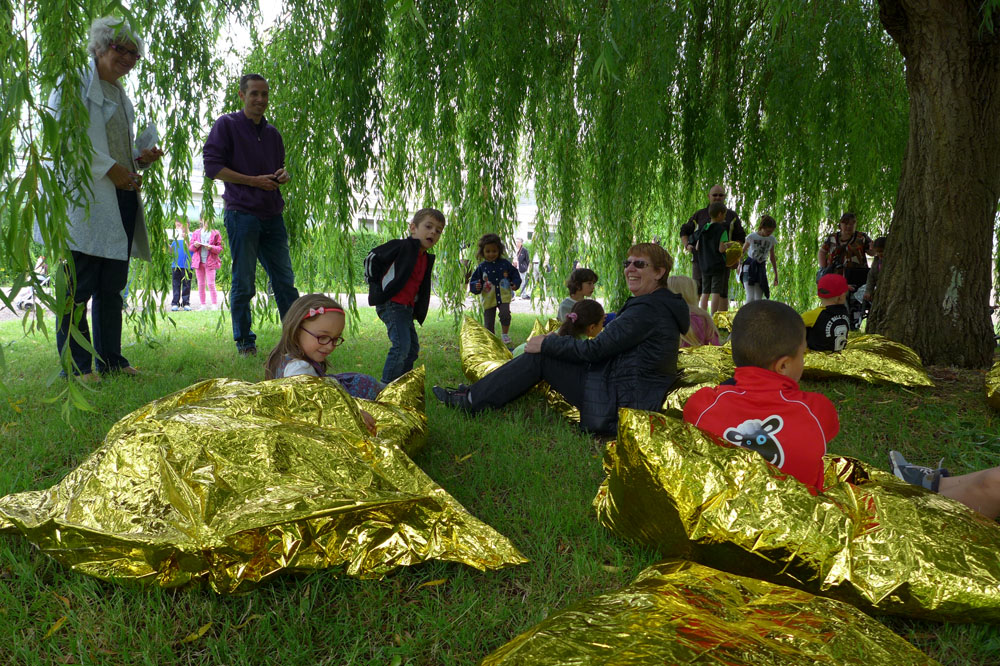 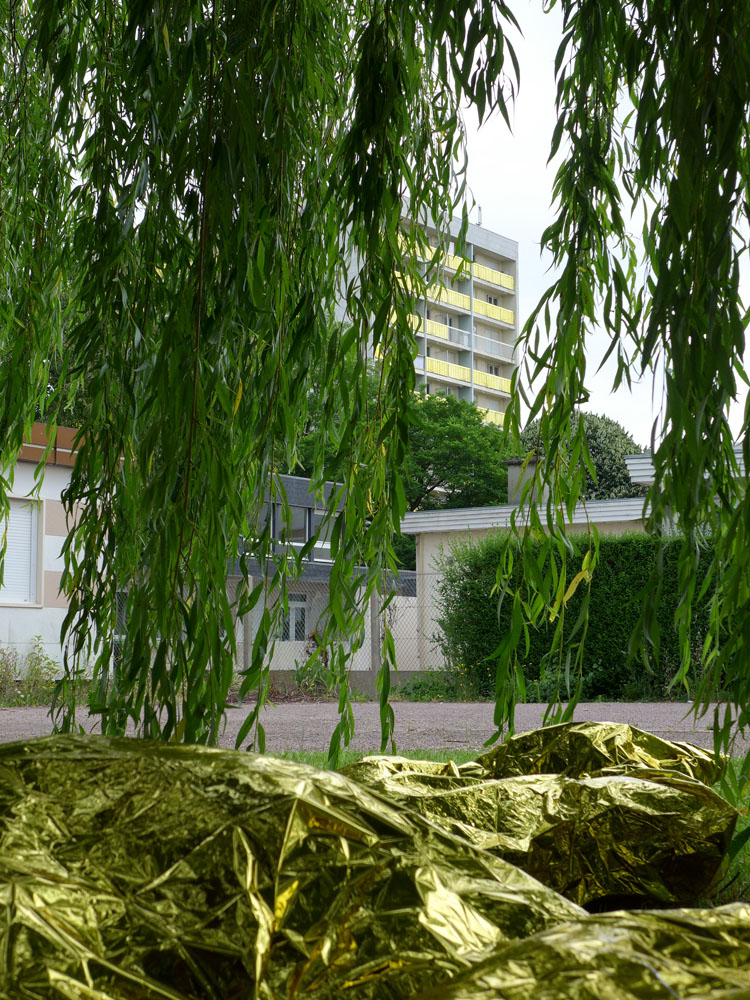 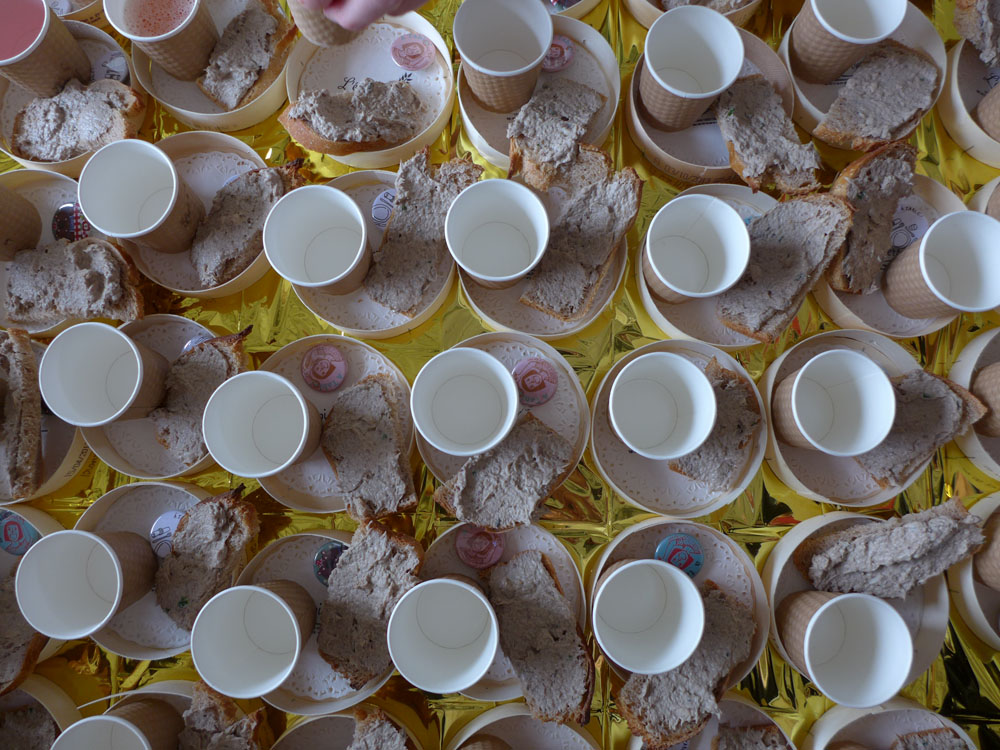 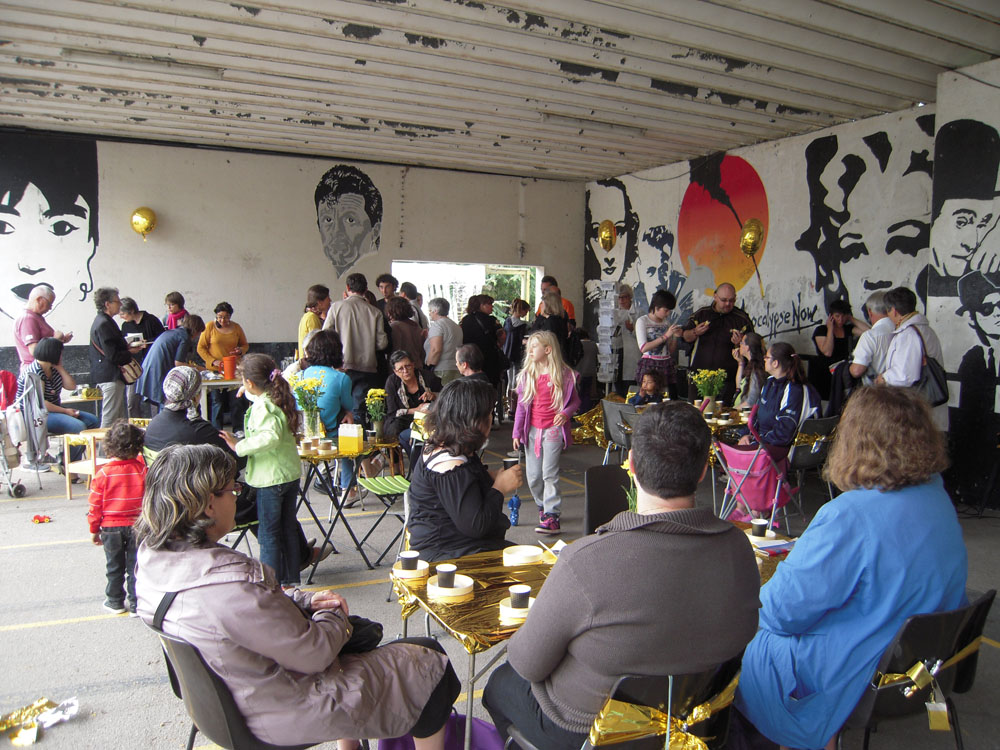